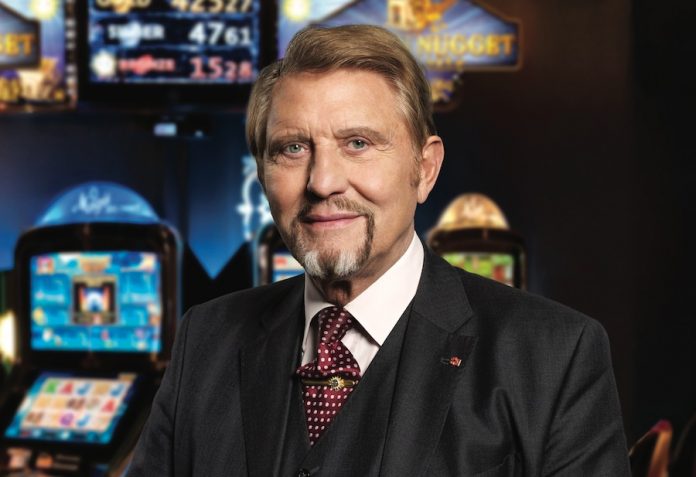 From armchair entrepreneur to industry leader in 60 years, in a this historical feature The Gauselmann Group looks back over its achievements through the last six decades.

The 60 year history of the Gauselmann Group is above all also the story of its founder Paul Gauselmann, who to this day plays a decisive role in plotting and steering the course of the company.

In as little as six decades, what started out as a part-time one-man business has evolved into a global group employing some 11,000 people and generating sales in excess of two-and-a-half billion euros. Since the 1980s the family-run company headquartered in eastern Westphalia has been the undisputed market leader in the German amusement machine industry.

In 1957, Paul Gauselmann took one of the boldest steps in his life when on top of his normal 48-hour week he started up a sideline installing jukeboxes. The foundation stone for the Gauselmann Group was laid. Thus – with 17 jukeboxes, 2,000 D-Marks in savings and 100,000 D-Marks in crossed bills of exchange – began a corporate success story that even after 60 years is far from over.

The armchair entrepreneur’s concept was so successful that only a year later his brother Willi joined the business, followed in 1962 by his brother Eugen. This trio was to pave the way for what became the genesis of today’s corporate group: Gebrüder Gauselmann.

After seven years, in 1964, Paul Gauselmann ventured into full-time self-employment. At that point in time, he already had 15 employees. The focus of the fledgling company was on installing slot machines in pubs. But technology-savvy Paul Gauselmann had a very special trump card up his sleeve: he bought up second-hand US jukeboxes on the cheap, overhauled the technology and gave the American imports a typically German-style cabinet (“The new outfit”). The complete box cost DM 1,500, a new one DM 5,000 and American imports anything between DM 7,000 and DM 11,000. His entry into production was thus sealed. This marked the beginning of a steep success curve for the Gauselmann Group: one important milestone was the “invention” of the modern arcade in the form of CASINO MERKUR-SPIELOTHEK.

The first was opened in Delmenhorst, Lower Saxony, in 1974. The Group currently operates over 600 entertainment centres Europe-wide.In 1976, the entrepreneur from Espelkamp revolutionised the market for amusement with prizes (AWP) machines when he was granted the licence for his first proprietary gaming machine, the Merkur B. By 1984, the Gauselmann Group had become market leader with a more than 50-percent market share. In 1980, Paul Gauselmann founded Gauselmann AG as a holding company for many of the companies that had been formed by then.

Since the 1990s, internationalisation has proceeded apace and the Gauselmann Group has grown to become a leading international AWP and vending machine developer and manufacturer and entertainment centre operator. Against this background, in 1998 the then subsidiary ATRONIC was the only European company to be granted a manufacturing licence for the American casino market in Las Vegas/Nevada. Today, development and sales of gaming machines and casino slot machines in the international markets is organised under the umbrella of adp Gauselmann GmbH with its Merkur Gaming sales brand. From a manufacturer of classic electrical/mechanical reel-based machines, the Gauselmann Group has advanced to become a provider of highly-developed electrical multigamers. In the course of the past four decades, more than two million gaming machines made by Merkur have rolled off the production line.

At around the turn of the millennium, the Gauselmann Group increased its focus on developing new business segments, leading to the company’s entry into the sports betting market in 2006. Today, this business segment offers and brokers sports bets under the brand names Cashpoint (Austria and Denmark) and XTiP (Germany) and serves international markets.

The biggest acquisition in the history of the Gauselmann Group to date was made in 2012 with the British arcade chain Praesepe, which employs a staff of around 1,750 and operates some 180 entertainment centres in the UK.

Since 2013, the Gauselmann Group has also been very successful in the casino segment. In December 2014, in partnership with Stadtcasino Baden AG, the first Merkur Spielbank Saxony-Anhalt was opened in Leuna-Günthersdorf. A second Merkur Spielbank opened its doors in Magdeburg in April 2016. The two locations are considered the most modern casinos in Germany. After acquiring a 40 per cent equity stake in Germany’s largest casino in Berlin, operated by Spielbank Berlin, the Gauselmann Group has played an active role since the beginning of 2016 as shareholder in the development of the five licensed Spielbank locations in the German capital. At the end of 2016, the Gauselmann Group was granted operating licences to run casinos aboard cruise ships. Under the brand name CASINO MERKUR MARE (CMM), the Gauselmann Group will in future operate the first four casinos on four cruise ships of the “Pullmantur Cruceros” cruise line.

The entrepreneur Paul Gauselmann realised early on that the industry is dependent on a multitude of laws, some of which need to be interpreted very judiciously. For this reason, he accepted an appointment to the committee of the German AWP Association ‘Deutscher Automaten-Verband e.V.’ (DAV) in North Rhine-Westphalia in 1966, of which he became Chairman five years later. At the same time, he became Vice President of the German Operators’ Association ‘Zentralorganisation der Automatenunternehmer’ (ZOA). Since then, Paul Gauselmann has served actively on a number of association committees, including chairing the German Amusement and Vending Machine Industry Association ‘Verband der Deutschen Automatenindustrie (VDAI) for the past 36 years. In May 2017, he was unanimously re-elected to this office for a further two years.