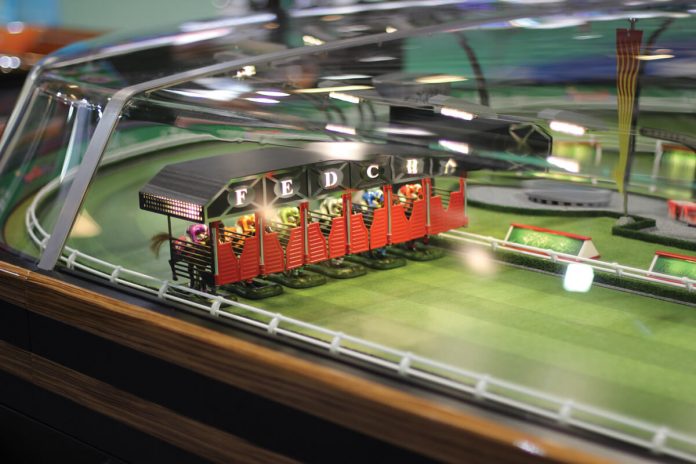 [dropcap]L[/dropcap]ast year, Alfastreet toasted record performance, as demand for the Slovenian manufacturer’s gaming products continued to grow in markets around the world. Now, speaking from the company’s booth at G2E Asia, sales director Albert Radman said this trend has continued in the first months of 2016. Asia has long been a key market for Alfastreet, with Radman attributing the company’s success there to its many loyal customers across the region. Following successful showings in North America and Europe, this year’s G2E Asia saw the mechanical horse racing game, Royal Derby, make its Asian debut, alongside its sister product, Wet Race.

While casino operators around the world are eager to install this impressive new machine, the Alfastreet stand also attracted visitors who were keen to see other innovations, such as the new R8 roulette, which has 23-inch touchscreen monitors paired with keyboards.

Also on display at G2E Asia was Alfastreet’s Wiky terminal, which boasts the industry’s largest 32-inch touchscreen monitor and the possibility to play up to four games at the same time. Alfastreet has created a complete array of gaming products through the years, but the company hasn’t stopped there. The testament of the relentless pursuit of creating perfect solutions for gaming venues worldwide has led to the development of the IQ slot machine range, which generated very good reactions from G2E Asia attendees.

In addition, the company’s online gaming platform solution enables gaming enthusiasts to enjoy the familiar user interface and genuine feel of its popular games from the comfort of their computers, tablets and phones – within or outside of the casino.

“We are doing excellently in Latin America,” Radman said, “and we are also doing excellently in the US. Right now, the American continent is bringing us more than half our production, and the rest is spread between Asia, Europe and Africa. “In Spain, we recently signed a deal with Unidesa. This was the right choice for us as a distributor and we have been shipping a considerable number of machines to the country over recent months.”