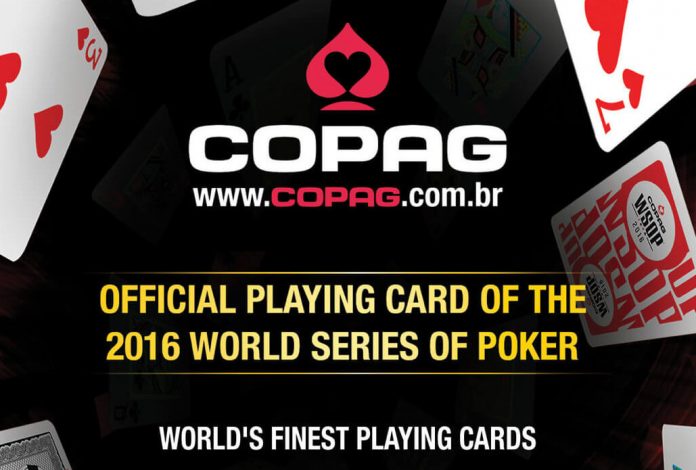 Copag is to once again become the exclusive card supplier of choice to the World Series of Poker.

[dropcap]B[/dropcap]razilian playing card specialist Copag has announced a multi-year agreement to return as the official playing card of the world’s most prestigious, longrunning poker event in the world, the World Series of Poker (WSOP).

Copag, a world market-leader in the manufacture of playing cards for over a century, has once again teamed up with the most trusted brand in poker in order to create a unique playing card experience.

Copag’s best-quality playing cards will be spread throughout WSOP’s upcoming poker festival, with two unique set-ups to be featured for the first time in WSOP history. Tournaments began at the Rio All-Suite Hotel & Casino in Las Vegas, Nevada on May 31 and will run 24 hours a day for seven consecutive weeks. The WSOP Main Event takes place July 9 – July 18.

As a product of the renewed partnership, poker’s largest live event, which attracted over 100,000 participants from 111 different countries last year, will now feature a new, unique set of playing cards.

“Putting quality playing cards on the tables at the WSOP is one of the most important elements of the entire event,” stated WSOP executive director, Ty Stewart. “We’re extremely pleased that Copag, given their track record to successfully supply some of the top poker tournaments in the world, will be the World Series of Poker partner in 2016 and beyond.”

Led by Eduardo Soares, Copag USA is the office in charge of North American sales. The Copag USA team is based in Florida. Soares, who owned a successful playing card company in Brazil, has over 30 years of experience in the gaming industry.

“Copag is proud to return as the official playing card of the WSOP,” said Soares, vice president of Copag USA. “We are confident that we can fulfill the player’s expectations by providing top quality playing cards, strengthening our partnership with this world class tournament for years to come.” Copag is one of the world’s largest manufacturers of playing cards and the leading manufacturer of highquality, 100 per cent plastic playing cards for casinos and individual card players. Based in Brazil, the company is part of the worldwide Carta Mundi group of companies.

Copag cards have been used in World Series of Poker and World Poker Tour events – and currently are seen by millions in hit televised tournaments such as the Heartland Poker Tour.