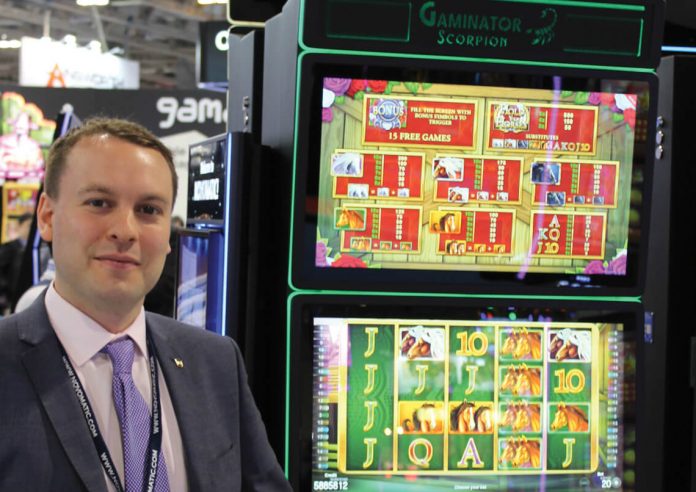 Boasting a central position on the show floor, Jade Entertainment presented a range of new Novomatic Gaming products to delegates at this year’s G2E Asia.

[dropcap]A[/dropcap]t the 10th anniversary of G2E Asia in Macau, several Novomatic products were presented in Asia for the very first time by the company’s official distributor in the region, Jade Entertainment and Gaming Technologies.

Boasting a central position on the show floor, the Jade product and sales teams showed off the new product range to their customers.

With offices in Manila, Kuala Lumpur and Macau, the official Novomatic distributor has a wide range of expert knowledge in the local markets. Directly from G2E Asia, Jade was able to secure a key product placement of Novomatic machines with a major operator in Macau, a major operator in the Philippines and clubs in Vietnam, with products going straight from the show floor to the properties.

Of the product highlights on the exhibition stand, the new VIP Lounge cabinet generated notable attention. This slim-line cabinet is one of three VIP cabinets launched this year and provides the VIP experience in a space-optimised lounge format.

“This new style of cabinet is the ideal solution for markets such as Macau,” said Mike Robinson, international communications manager for Novomatic. “It offers an affordable way of bringing the VIP experience into the mass segment. The VIP Lounge allows casino operators to create a VIP experience without taking up a lot of space.”

First unveiled at ICE Totally Gaming earlier this year, the Gaminator Scorpion has created a stir amongst casino executives around the world. As such, a bank of four machines was taken to G2E Asia, demonstrating the Novo Line Interactive and Impera Line HD platforms. This latest version of the international best-selling Gaminator cabinet is highly attractive with a matte black finish and comes with three 24-inch full HD LED screens.

“We launched the Gaminator Scorpion at ICE this year. It received a huge amount of interest, and we are positioning this as our next core cabinet for the international market,” Robinson said.

Another debut for the market was the Novostar II cabinet, which is the result of transforming the original Gaminator into a brand new machine with re-engineered components. It was shown with The One and Only game mix that was designed specifically for the new cabinet. Also on show were the proven-performers, the Dominator and sister cabinet Dominator Curve, with a variety of game mixes including the Macau mix.

Joe Pisano, CEO of Jade Entertainment, said: “G2E Asia was a very successful show for us with visitors from all parts of Asia coming to the stand with the intent to buy product. The new Gaminator Scorpion, in particular, attracted a lot of interest from visitors.”