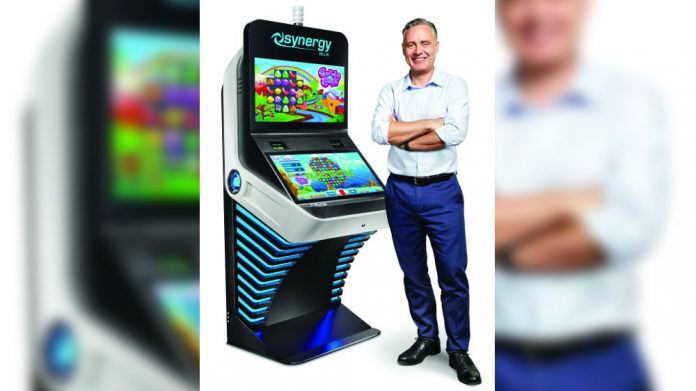 Synergy Blue has launched its new 2600 cabinet series, inspired by the original Atari 2600 console and designed in consultation with Nolan Bushnell.

Skill-based slot maker Synergy Blue has unveiled an Atari-inspired cabinet that will bring arcade-style gaming to casino floors in Q4 2020.

The Las Vegas-based company announced the release of the 2600 cabinet series at the start of September. Designed in consultation with Atari founder Nolan Bushnell, who’s been called the father of the video game industry and who referred to the original 2600 introduced in September 1977 as the “hallmark of video-game console design.”

The new 2600 series is “built with today’s players in mind and offers sleek and smooth gameplay, along with multiple arcade-style controllers such as steering wheels, joysticks, arcade guns, touchscreens, and buttons,” said Synergy Blue CEO Georg Washington. It provides casino operators with a greater variety of machines and casino games, which keeps players on casino floors longer and appeals to various and expanding casino demographics, he added.

“The Atari 2600 introduced an entire generation to the fun and excitement of video games,” Washington said. “When we began working on cabinet ideas, we kept coming back to the nostalgia that gamers around the world have for the original 2600, but we wanted to update it with today’s players in mind. For me, as a young guy getting into video games, the Atari 2600 cabinet was the benchmark console design. It served as an inspiration to provide that excitement and engagement and create that same sort of feeling of when you were a kid. We wanted to blend that arcade with the gambling experience.”

Washington said an announcement will be made when the consoles are placed in properties. The company is looking at partnering with casinos in Las Vegas and elsewhere across the country. He said the console is more “eye-catching” than previous designs and incorporates COVID-19 safety features.