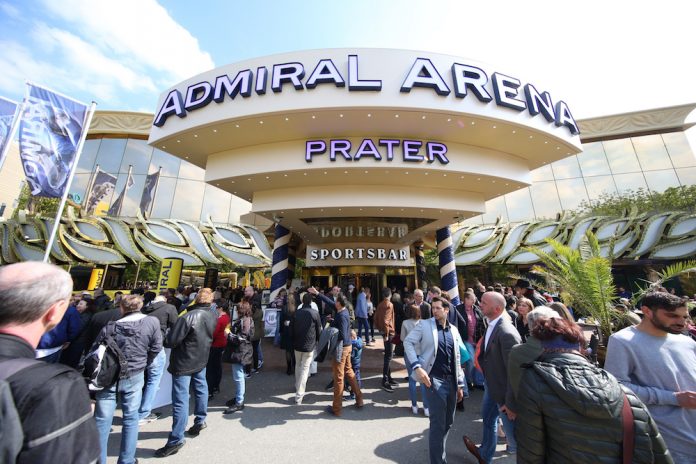 NOVOMATIC has confirmed that ADMIRAL Arena Prater opened on May 1 following six months of conversion work to become the largest sports bar in Europe.

The launch event for ADMIRAL was attended by around 3,500 guests as well as racing legend and NOVOMATIC brand ambassador Niki Lauda and NOVOMATIC AG CEO Harald Neumann.

A range of activities and events were on offer both outdoors and inside the venue – action stages, football modules, and autograph sessions by the Vienna Capitals ice hockey team, the Austrian woman’s national football team, as well as Rapid Vienna and FK Austria Wien football teams. The owners claim ADMIRAL Arena in Vienna’s Prater offers sports betting of the highest caliber over two floors covering a total area of 1,350 qm. At the centre of the venue there is a large, semi-circular bar with a 15 qm LED wall in high definition picture quality. Another LED wall, and at 42 qm is one of the largest LED walls in Europe broadcasts sporting events from 9 am to midnight daily.

The main wall can also be split into many different screens thanks to NOVOMATIC-developed software. “This means that, for instance, all Champions League games playing at the same time can be broadcast together – this broadcasting possibility is unique in Europe,” said Harald Neumann.

The interior furnishings are exclusive in Austria and feature around 70 betting terminals, a dedicated horse racing area, a selection of Grand Prix race courses, which can be tested on a Red Bull Racing Seat, and an entertainment stage for all kinds of events.