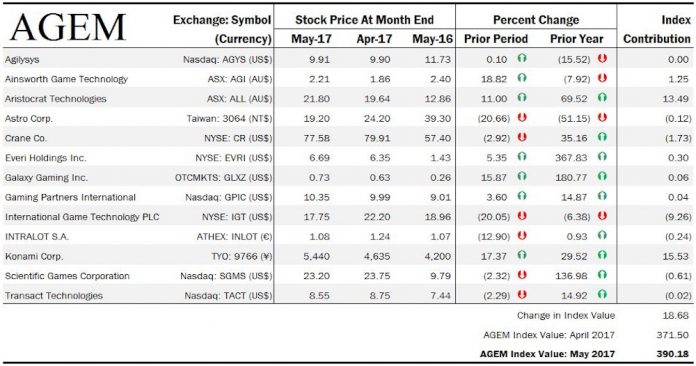 The AGEM (Association of Gaming Equipment Manufacturers) Index reached another record high in May, continuing the momentum from previous months.

Selected positive contributors to the May 2017 AGEM Index included the following:

The AGEM claims that while many states in the U.S. have opened their doors to gambling over the past few decades, Florida’s gambling industry remains in a state of flux. On May 18, the Florida Supreme Court upheld the decision by the First District Court of Appeal to block a voter referendum passed in Gadsden County allowing for the expansion of the number of slot machines in the area. As a result, it is up to the state legislature to determine the future of Florida gaming.

The primary gaming operator in Florida is the Seminole tribe, which operates six casinos in the state. Outside of the territories of the sovereign Seminole nation, Florida has only two counties that are allowed to offer slot machine gambling legally, via legislation passed in 2004 permitting existing pari-mutuel facilities in Miami-Dade and Broward County to offer slot machine gambling. In exchange for the state-enforced monopoly, the Seminole tribe pays the State of Florida $120 million a year.

The case has considerable bearing on the gaming climate in Florida, as seven other counties had passed similar referendums to the legislation passed in Gadsden County to expand the gaming opportunities offered within their respective territories. Gadsden is a non-charter county in Florida, which the Court considers having less self-rule authority than counties with charters. Four of the seven counties with new pro-gaming legislation are considered chartered counties. It is unclear if the legal precedent will be applied to all or a portion of the counties pursuing gaming expansion. However, the general legal consensus is that to expand gaming in Florida, state laws will need to change.

The ruling therefore places the impetus on the state legislature to change the Florida constitution, which expressly forbids gambling save for the areas previously mentioned. On May 30, the Florida Senate passed SB 8, which would allow slot machines at horse and dog tracks in eight new counties. The bill would also allow Native American reservations to offer more games such as craps and roulette at their current casino properties. The bill passed through the Senate with an overwhelming 32-6 vote but is expected to meet considerable resistance in the House. The House has its own version of legislation that fashions a much different gaming landscape. In the House bill, the Seminole tribe will be allowed to keep its current games and slots for 20 years, but it would not be allowed to add any gaming offerings, while slot machines would remain exclusively within tribal-run casinos and the two Southern Florida counties that already offer them.

Though the future of gaming in Florida is unclear, lawmakers there realize that the task of determining the industry’s reach and scope lies squarely in their hands.