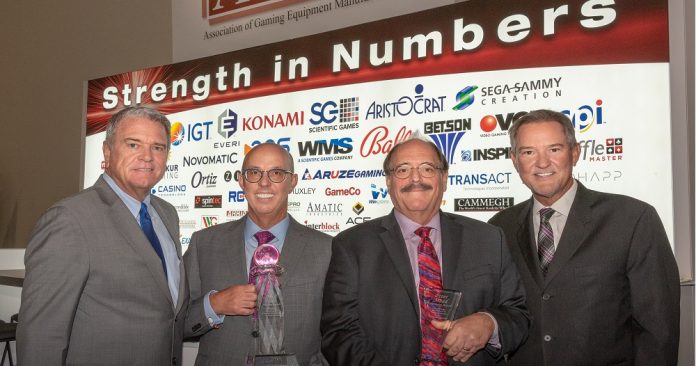 Ahead of G2E 2019, the Association of Gaming Equipment Manufacturers has outlined its top 12 success stories of the past year.

AGEM released a comprehensive report in April showing the global gaming supplier industry generated a total economic impact of $55.8 billion, supported more than 202,000 employees, including 61,700 direct employees, and supported a total of $14.1 billion in wages and salaries during 2018. The report titled “Impact Analysis: Global Gaming
Supplier Industry” was the result of an independent study commissioned by AGEM and conducted by the respected Nevada-based research firm Applied Analysis. The report reflects a recurring update and the most comprehensive review to date of the global gaming supplier industry that analyses the size and scope of this technology-driven sector, specifically identifying AGEM members’ global reach spanning every regulated gaming market in the world.

AGEM and GLI announced in June the creation of their new “Lasting Impact Philanthropic Initiative,” a multi- year effort aimed at identifying worthy causes that will utilize direct contributions to flourish over the long term and provide a variety of assistance to multiple beneficiaries. The first gift from the newly formed Initiative was a $500,000 contribution to the Howard R. Hughes College of Engineering building fund at the University of Nevada, Las Vegas (UNLV), which is developing a 51,000-square foot, three-floor building on campus.

The Initiative’s $500,000 gift is a direct investment in the importance of education in Nevada, the city of Las Vegas, university students and faculty and the future pipeline of skilled engineers for gaming and many other industries. The second gift so far in 2019 was $200,000 in September to the Dr. Robert Hunter International Problem Gambling Center in Las Vegas.

The AGEM initiated legislation that became Assembly Bill 221 in Nevada and was swept into law expanding the state’s technology and manufacturing workforce by giving those 18 to 20 years legal status as a “gaming employee” working for slot machine, systems, table game and component suppliers. Previously, Nevada statute prohibited any person under 21 from being employed as a “gaming employee” except as a member of a casino count room staff.

The passage of AB221 retains the count room exception for casino operations, and otherwise applies only to the technology supplier sector, which previously couldn’t even offer internships to those under 21.

AGEM and the rest of the industry were caught off guard by Apple’s June announcement that new guideline changes for its App Store will impact iGaming and sports betting suppliers and operators by requiring apps and games to be developed in Apple’s native code by a Sept. 3 deadline or face removal from the App Store.

AGEM took its case all the way to Apple CEO Tim Cook and Apple granted an unexpected extension until March 3, 2020 that will ease the timeframe pressure for both technology providers and regulators.

AGEM continued to cultivate contacts and relationships on the ground in Japan, where new integrated resorts will create the world’s most technologically advanced casino gaming environments. AGEM has established a relationship with the Preparation Office of Japan Casino Regulatory Commission, Cabinet Office as regulations and technical standards
impacting suppliers are contemplated.

In the US, the AGEM supported the successful effort for new casinos in Arkansas and
applauded the large expansion developments in Illinois that could result in 30,000 new gaming positions.

No. 6: Industry cooperation pays off

AGEM Director of Europe Tracy Cohen was selected to represent suppliers at the ECA’s Diversity and Inclusion for Career Enhancement launch in June.

As a specific example, the annual AGEM-AGA Golf Classic presented by JCM Global in May had another successful run, raising $197,000 and now raised more than $2.1m for the NCRG over the event’s 21 years.

No 8: AGEM delivers on commitment to education

AGEM continues to fund the AGEM Scholarship through the American Indian College Fund, highlighting a busy 12 months focused on the educational component in its mission statement.

In addition to supporting Indian Country, AGEM has funded scholarships or contributions to the UNLV Lee Business School, Nevada State College, the Global Gaming Women Charitable Education Fund, Atlantic Cape Community College, the International Center for Gaming Regulation at UNLV, the UNLV Center For Gaming Innovation, Las Vegas Discovery Children’s Museum and Spread the Word Nevada. In Mexico, AGEM pledged $12,500 to National Autonomous University of Mexico to help fund a gaming industry overview that will capture all of impacts of gaming in this active market.

No. 9: Work continues on regulatory reform

AGEM continues to work with regulatory bodies around the world to advance the overall interests of its members. AGEM was especially active in Nevada over the past 12 months as Sandra Morgan replaced Becky Harris as Chairwoman of the Nevada Gaming Control Board and the AGEM Compliance Committee identified area of improvement to increase the flow of technology through the GCB test lab.

At G2E in Las Vegas in 2018, AGEM revealed the third winners of the Jens Halle Memorial Award Honoring Excellence in Commercial Gaming Professionalism – former SHFL entertainment CEO and Vice Chairman of the Board of Scientific Games Gavin Isaacs – and the Peter Mead Memorial Award Honoring Excellence in Gaming Media & Communications – longtime slot machine expert and current Editor for Global Gaming Business magazine Frank Legato. The 2019 winners will be announced Oct. 14, with the awards presentation at G2E set for Oct. 16 at 4 p.m. at the AGEM booth.

Total AGEM membership at the Gold, Silver, Bronze and Associate levels hit 175 companies in April — 20 years after AGEM was formed by the “big four” slot companies of Aristocrat, Bally, IGT and WMS.