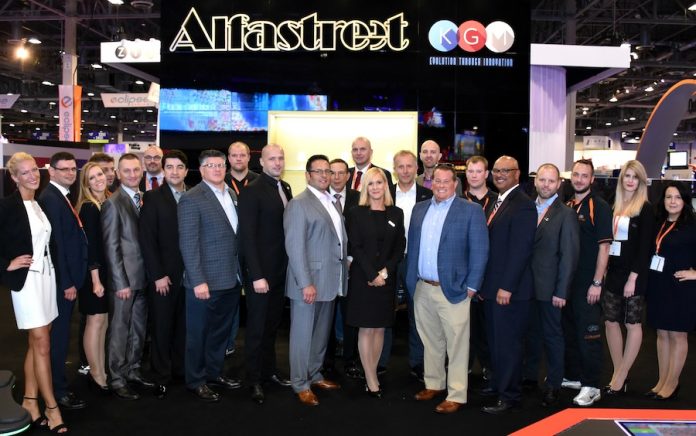 The 2017 G2E proved to be very satisfying for Alfastreet, with a number of the company’s latest products receiving acclaim at the Las Vegas show.

Alfastreet claims its most innovative product at G2E was the brand new Multitouch roulette table which was unveiled at the ICE show earlier this year and has already gained recognition on various casinos worldwide.

The Multitouch, a fully automated machine, that combines the experience of a live roulette table with the advantages of having an electronic setup, has reportedly been a hit with players who appreciate the functionality and the entertainment factor. At G2E the machine stood out for being the first of its kind to offer the possibility to operate as a fully automated or live while still allowing the dealer to spin the wheel manually.

A spokesperson for Alfastreet said: “The reactions exceeded expectations, the concept is appealing to many operators worldwide and the machine will soon be available in top gaming venues of the world. Our stand theme was delightfully tied up with an attractive new colour combination of textured black finish and red inserts. All the roulettes were equipped with the companys’ new wheel concept, where the lighted numerical board offers a big visual impact to the players. The new cross design complements the effect, making these wheels by far superior to any competition.”

Alfastreet also showcased its 8-station electronic roulette, Lucky 8, which premiered at the show last year and which has proved a success with players and operators in that time. At G2E Lucky 8 was on display with a dedicated signage superstructure and the company saw a key boost in orders for these cabinets at show.

In addition, Alfastreet’s horse-racing machine, The Royal Derby, was presented with two options; the WIKY has a 32” touch screen monitor, while a brand new Felix S boasts a 27” one and will enter the operation by the end of this year. The Table Top is a compact solution for alternative placement, such as bars or tight spaces, and has returned combined with a coffee table style base.

Alfastreet is working on a further improvement of the user interface and managed to show the preliminary version of the unified platform, which it claims received good feedback and positive reactions.

The company stated it will also soon present an updated game selection for its Felix S slot machine, providing more options to the operators.

The company spokesperson concluded: “Alfastreet has confirmed its worldwide leadership as far as electronic table games are concerned and gaining recognition for the new slot machine range also. Constant investment in research and development and highest flexibility has kept the company ahead of any competitors, remaining the brand of choice for the best gaming venues of the world.”