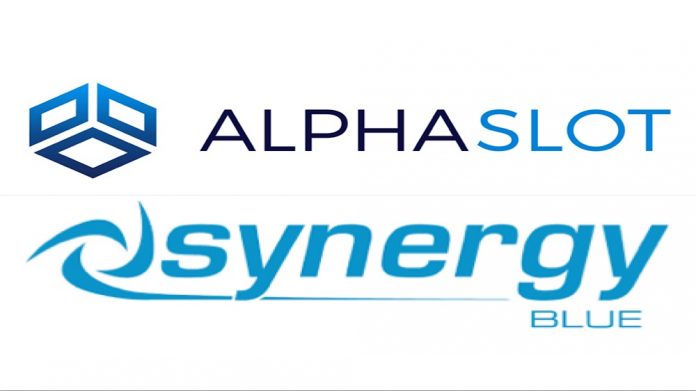 Alphaslot and Synergy Blue have announced an agreement to bring Blockchain entertainment solutions to casino gaming markets in across the Americas, Asia and Europe.

Alphaslot’s blockchain API is the main interface for casino gaming equipment to connect with players on the casino floor via a blockchain network. This allows for interactive gaming experiences in a transparent and trusted environment for both casino operators and regulators.

“Alphaslot is leading the way for blockchain adoption in the gambling industry,” said Georg
Washington, CEO of Synergy Blue. “While microtransactions are unheard of in the
casino/gambling world, they are pervasive in the video game market. Our goal is to explore how to leverage blockchain technology to help attract the next generation of gambler and provide innovative entertainment experiences. We are excited about exploring blockchain technology and working with regulators, casino properties, and Alphaslot to ensure compliance and to help spark adoption throughout the industry.”

Raymond Chan, CEO and co-founder of Alphaslot, said, “This agreement with Synergy Blue in America will give us an opportunity to expand into the emerging market of skill-based casino gaming, which could lead to demand for interactive products powered by blockchain technology. Our new blockchain technology, combined with Synergy Blue’s gaming innovation, could help shape the future of the casino gaming industry. Alphaslot and Synergy Blue are taking our first steps with a serious and continuous commitment. We already had great success presenting our vision at the London ICE show in February and we’re very excited to showcase again our blockchain API at G2E Asia in Macau.”

The agreement between Alphaslot and Synergy Blue underscores the interest of both parties towards the future of blockchain technology and the industry.