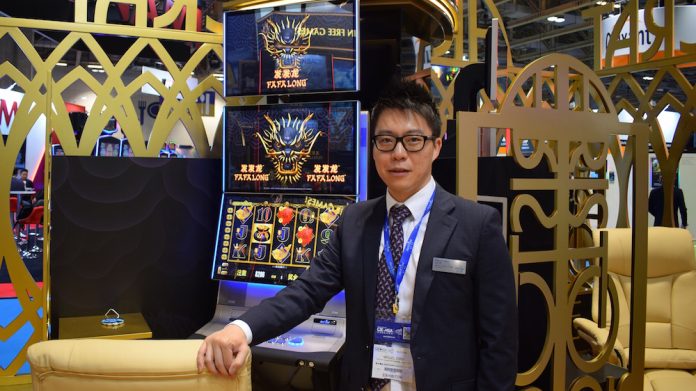 Miguel Choi, Aristocrat’s regional marketing manager for the Asia Pacific, explains that the company’s links continue to go from strength to strength across the region.

Aristocrat’s presented its latest products on an innovative stand at G2E Asia that replicated an actual casino floor with the 5 Dragons zone, showcasing the company’s biggest Asian brand; along with a Mass Market Gaming area; and a High Limit Room.

“Asia is a link-driven market, and we’re displaying three premium jackpots on the stand this year, including Mighty Cash, Lightning Link, and Good Fortune, which is doing phenomenally well for Aristocrat right now across the globe,” stated Miguel Choi, Aristocrat’s regional marketing manager for the Asia Pacific.

“At the beginning of last year when we launched Lightning Link, we debuted two titles, Happy Lantern and Dragon Riches, and those are doing really well,” Choi continued.

“Late last year we launched Eyes of Fortune in December, and this year at G2E Asia we are showing Emperor’s Treasures, which is another follow up title.

“All of the games are very Asia-driven, Happy Lantern prominently utilises the Choy Sun character while Dragon Riches naturally features dragons, which of course are very popular in the region, and Emperor’s Treasures builds further on that trend with its Imperial theme.”

As with all Lightning Link titles, Emperor’s Treasures incorporates the popular Hold and Spin bonus feature.
“The Hold and Spin feature is triggered when six bonus symbols land on the reel during the free spins bonus,” he explained.

“All the bonus symbols remain in place while the rest of the positions spin, so long as the player continues to land bonus symbols, they’ll continue to earn free spins.

“This will continue until three spins go by without locking another bonus symbol in place or until all of the positions are occupied by bonus symbols.”

For the Premium market, Aristocrat displayed Fa Fa Long in the High Limit area, which was designed to replicate a Macau VIP room.

“Boasting a stylish black and gold design, the game is based on a proven repeat-win math model that has been successful in other markets worldwide, but it’s a first for Asia, no-one has done this before.

“It’s a fast-paced game which pairs simple mechanics with intuitive line displays, which offer players a low line math model which is very easy to learn.”

Developed with the Philippine market in mind, the company also showcased the multi-denom link Dragon Lanterns, the first in a new generation of ‘Floating Wilds’ games.

“Dragon Lanterns utilises the Floating Wilds mechanic, when the wild is on the screen, on the next spin it will float up,” Choi highlighted.

“These wilds have a bonus which is awarded when the Dragon Lanterns symbol lands on a Lantern, it really adds an additional strategic element to the gameplay.”