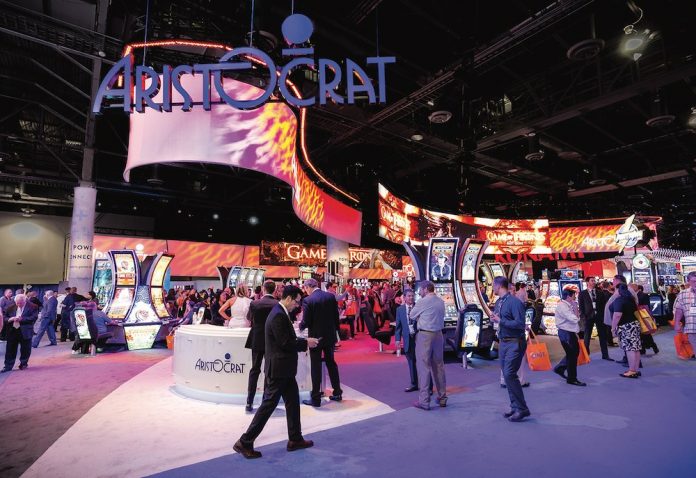 Aristocrat Technologies is expected to unveil its new portfolio for EMEA markets at ICE 2018, under the theme: “It’s all about what’s inside”.

“Aristocrat’s premium offering and clear, simple messaging for 2018 has already been acknowledged by visitors to G2E in Las Vegas, where our booth was voted the number one showcase for the fourth year running in an independent survey,” said James Boje, managing director EMEA.

“Our ongoing drive to deliver the world’s greatest entertainment experience, every day, is centred around three key pillars – the content, the people who create the content and the delivery platform to bring out the best in our games.

“Having witnessed the huge array of stunning games in Las Vegas and customers’ response to them, we are now excited to bring the very best of them to gaming floors across Europe, the Middle East and Africa.”

Leading the charge of new licensed concepts on display at the London show is the Flame55TM cabinet, a sleek and elegant large format cabinet featuring a 55-inch portrait double-curved screen.

Available in standalone and beacon carousels, the launch title is themed on the three-time Grammy award winning pop music superstar brand, Mariah CareyTM – artist of the millennium who has sold over 200 million albums.

The Flame55 pipeline includes a sequel to the highly successful title Game of ThronesTM and a new title based on the HBO powerhouse series, WestworldTM.

Another bill-topping ICE breaker is the eagerly awaited Dragon LinkTM, which is an ArcTM Single portrait-screen form factor evolution of Lightning Link with one and two euros added to the player-selectable multi-denomination options.

Boje concluded, “Aristocrat is packing more layers of rich content and features into an expanding portfolio of games, supported by our popular and proven mechanics. We’re delighted to be delivering customers products that perform and we look forward to offering them even more choice and sharing our vision of the future at ICE 2018.”