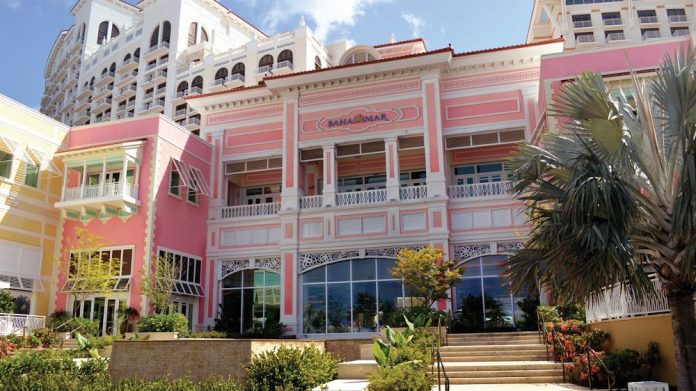 The $300m water park expansion will increase the Baha Mar resort’s workforce by ten percent, and has been welcomed by both the government and trade bodies.

The Bahamas government has approved a $300m expansion to Baha Mar, which will see the addition of a new water park to the property, bringing the resort’s total investment up to $4.8bn.

Dubbed Baha Mar Bay, the project is scheduled to be completed in the next 12 to 24 months and will be located between the SLS Lux and Melia hotels on the 14-acre site that previously housed the Wyndham resort and Crystal Palace casino.

According to a report in The Times, the new water park will also include a “secret garden” casino. The investment will also see significant renovations and enhancements to the Melia Nassau Beach Resort, along with the development of Long Cay, Baha Mar’s private 15 acre island, with the addition of new food and beverage facilities.

“It will include a family friendly recreational area with water attractions for guests of all ages,” said the Bahamas’ prime minister Hubert Minnis following the signing of a Heads of Agreement between resort representatives and the government in mid-October.

“There will be a ‘public entry area where the general public can enter Baha Mar Bay to enjoy the attractions and activities.

Phase two will also include the widening and lengthening of the existing pier in front of the Baha Mar resort.” The pier expansion will allow for boats to dock at the resort for day excursions and will offer additional amenities for guests.

“The new Pier restaurant will provide a greater variety of beachfront and pool dining options for the guests at the resort and Baha Mar Bay, and will complement the existing food and beverage offerings at the resort.

“An upgrade and refurbishment programme will be launched for the Melia hotel which will include the upgrade to the mechanical, electrical and plumbing infrastructure of the hotel and upgrades to specifically identified guest rooms,” he continued, adding that the will also be upgrades to the property’s kitchen, convention and meeting spaces, gym, restaurants and public areas.

Dionisio D’Aguilar, minister of tourism and aviation, said water parks were fast becoming a ‘must have’ feature for mega resort properties.

“I think that Baha Mar realised, certainly when they completed construction of their property, that they needed to add water activities,” he clarified.

“This helps to accomplish that, and they’re going to open it to the public. It will give Bahamians, which I find most attractive, the ability to visit a water park in their own country. “It continues to add to the inventory of product that’d available in Nassau, and water parks seem to be the in thing. People look for water-based activities, especially in tropical settings like The Bahamas.

It will help drive additional business to The Bahamas, and that translates into more revenue for the country in more ways than one.”

D’Aguilar reported that the 500 permanent jobs created by the expansion will inject $12.5m in new wages annually into the economy based on an average $25,000 salary, and will provide a much needed boost in the wake of Hurricane Dorian.

“It’s increasing the employment levels at Baha Mar by 10 percent, so yes, it’s very significant,” he affirmed. “You have all the goods and services, and utilities and imports and VAT as well from this.

I was very anxious for it to get concluded, and I’m glad we’ve reached that point. “We have a lot of people in New Providence from the affected islands, and it will take time for them to find employment and get back up and running.

This will help to ease that pain somewhat. It’s an immediate boost to employment levels which will help to negate the negative impact of the storm on the economy.”

In line with this, the prime minister emphasised that the expansion will assist rebuilding efforts on Grand Bahama and Abaco, as the government strives to fill the 20 percent gap in the country’s GDP caused by the Category 5 storm.

“Many individuals both in Abaco and Grand Bahama would now be seeking jobs and what we are doing today represents direct jobs of about 500 individuals, and indirect 1000,” Minnis stated. “So that’s 1,000 individuals who can be employed.

And speaking with Graeme [Davis] and the Baha Mar team, he has informed me that once it’s been signed the job opportunities will begin immediately. “And therefore, I would ask Bahamians out there who can hear my voice to take advantage of this opportunity because this will help to rebuild both Grand Bahama and Abaco.

So that 20 percent that we lost in our GDP will be replaced as quickly as possible so we can see our economy continue to grow.”

Fred Lounsberry, president of the Nassau/Paradise Island Promotion Board, characterised the Baha Bay expansion as “great news and very exciting for the destination” as a whole. “It represents incremental business for all types of businesses,” he stated, adding that Baha Mar had made a significant contribution to the regional economy since it opened in 2017.

“You can look at the numbers on arrivals and occupancy, and we have had a steady incline for the last few years along with the addition of Baha Mar.”

Lounsberry also rejected concerns that a water park at Baha Mar’s would reduce differentiation between Nassau’s two mega resorts, given that Atlantis Paradise Island already has such a facility.

“If anything it’s going to bring people back,” he contended. “These amenities are primarily for the resort guests. It’s just an addition to Baha Mar that will give visicome to Baha Mar as well as broaden their options when thinking about coming to The Bahamas.

Repeat visitors are a big part of any destination.” Carlton Russell, the Bahamas Hotel and Tourism Association’s president, praised Baha Mar’s expansion as “yet another example of the faith and value investors place in The Bahamas as a premier tourism destination”.

“Our tourism product continues to improve thanks to the substantive investments of tourism stakeholders such as Baha Mar,” he said.

“The injection of investor dollars, and the creation of a substantial number of new jobs, is particularly exciting and necessary at this time with many income streams adversely affected post-Dorian. We welcome and applaud the continued enrichment of our overarching tourism offering with this Baha Mar expansion.”

1xBet is an official sponsor of the SiGMA Americas virtual conference

1xBet aims for victory at the prestigious EGR Operator Awards