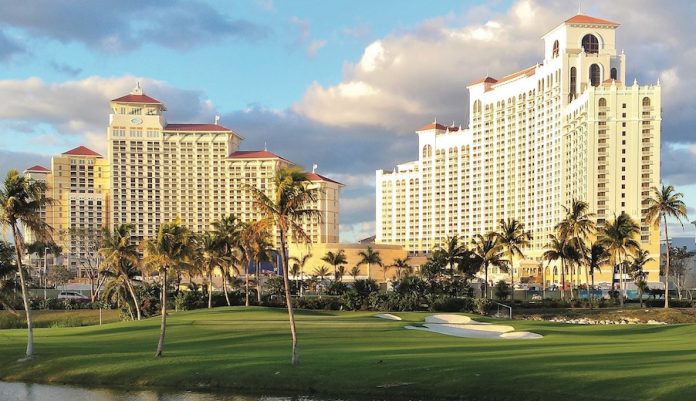 The remaining pieces of the mega-resort – said to be 97 percent complete when it went into receivership – are falling into place. But with its casino equipment facing a customs probe and the ink still wet on its new gaming licence, can Baha Mar be set for its April soft opening?

Bahamian mega-resort Baha Mar still has a few hurdles in its path, but it seems determined to go for a soft opening of the first phase on 21 April. It’s a big ask, but the roadmap seems to be getting a little clearer for the ill-fated project.

The resort has now officially been handed over to its new owner, and with the ink still fresh on the paper, a new gaming licence has been awarded to the resort. All that remains is a resolution to an investigation by customs into the supply of machines to the venue – a big obstacle in fairness – and an opening this month is tantalisingly within grasp.

Likely, probably not, but significant progress indeed for the Baha Mar.

This March, the Bahamian subsidiary of Hong Kong conglomerate Chow Tai Fook Enterprises (CTFE) officially accepted a Temporary Certificate of Occupancy from general contractor China Construction America (CCA), which signifies that the property meets safety standards and that its mechanical and electrical systems have all passed inspection.

“I feel very good about this development and the work that went unto this,” stated Minister of Tourism Obie Wilchcombe at the certificate handover in Mid-March. “Next month is going to be great.”

The transfer came four months after CTFE confirmed that it was the new owner of the unfinished $4.2bn Baha Mar project, after working out a deal with the Chinese bankers who foreclosed on original owner Sarkis Izmirlian following the property’s 2015 bankruptcy filing.

The certificate transfer allows Baha Mar to accept reservations for guests at the Grand Hyatt hotel – the first of three hotels set to open on the property – and CTFE Bahamas president Graeme Davis confirmed to local media that the property would begin booking guests “very, very soon” following the launch of a major marketing campaign.

Davis suggested that the property would welcome non-paying guests on its April soft opening in order to work out any complications, with the resort’s casino, golf course, restaurants, bars and convention centre set to open at the same time.

CTFE had previously said that it was in discussions with SLS Hotels and that it intended to bring its own subsidiary, Rosewood Hotel Group, as a luxury hotel operator with the second phase of the property – branded SLS Baha Mar – scheduled to open in autumn 2017, with a third and final phase due to launch in the spring of 2018.

Until recently, Pariente was chief gaming officer for Hard Rock International’s Punta Cana resort in the Dominican Republic and before that worked at Wynn Encore in Las Vegas. Zaremba created and operated the most successful high limit and private gaming salons in Las Vegas at The Cosmopolitan, Venetian, and Palazzo.

CTFE subsidiary Sky Warrior (Bahamas) Ltd will run Baha Mar’s gaming operations, which will be the largest in the Caribbean.

Baha Mar is currently reinstalling the gaming equipment that was put in place by the original developer but was removed following the bankruptcy filing, and training is already underway for the casino floor staff.

Over 1,000 Bahamians have been hired at Baha Mar so far; and that figure is expected to increase to a minimum of 1,500 employees.

However it was reported that the resort had hit a further difficulty this month, after local customs officials were reported to have initiated an investigation into the types of gaming equipment imported for use at the $3.5bn development.

According to local media, the island nation’s customs office is to look into whether the slots set to be utilised at the development are on a list of “prohibited and restricted imports and exports”.

The Bahama’s customs regulations prohibit any “person, club or organization” from importing without a valid licence, any “mechanical games and devices” that are initiated by the “insertion of a coin or token” and then “return mechanically or otherwise” any prize that is of “greater total value than that of the coin or token inserted”.

These rules prohibit the importation of “parts and accessories of such games or devices” with the situation raising questions as to why Sky Warrior (Bahamas) Limited was allowed to bring the slots into the country before the Gaming Board for the Bahamas had approved its licence.

The leader of the opposition Free National Movement (FNM), Dr Hubert Minnis has been highly critical of the government for its lack of transparency in its dealings with the Chinese companies involved in the project.

“The PLP calls it a ‘soft’ opening but as the details continue to leak out, the Bahamian people are left with the sinking feeling once again of what amounts to a ‘fake’ opening as they hear things like the resort is not taking reservations for this opening,” stated Minnis.

“How can the people share the PLP’s election year optimism when the hotel is still not taking reservations on their website [and] Baha Mar has yet to engage in any significant marketing to draw people to the new resort?”

Minnis has pledged that his party – presently the largest opposition party – will “engage and execute a real sale” of the Baha Mar resort “to a qualified and respectable purchaser who believes in Bahamians,” should the FNM win May’s general election.