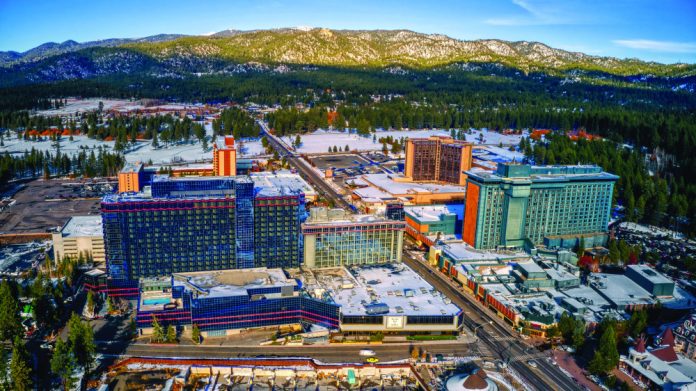 Bally’s Corp has completed its purchase of the northern Nevada resort from Caesars Entertainment. The transaction formed part of a $155m deal which also included Eldorado Shreveport in Louisiana.

Bally’s Corp has completed its purchase of MontBleu Resort in northern Nevada from Caesars Entertainment.

“MontBleu is a premier entertainment asset that is commensurate with the iconic Bally’s brand, and advances our ongoing portfolio diversification strategy,” said George Papanier, president and CEO of Bally’s. “With the close of this transaction, we look forward to integrating the property into the Bally’s family, and utilising it as an attractive destination for our loyal Bally’s customers to drive visitation to Lake Tahoe.”

The sale was announced ahead of last year’s $17.3bn merger between Caesars and Eldorado Resorts.

Rhode Island-based Bally’s acquired the resort in Stateline, as part of a $155m deal which also included Eldorado Shreveport in Louisiana.

“I want to thank the team members of MontBleu for all of their hard work and dedication throughout the years with the Caesars organisation, particularly during the COVID-19 pandemic,” stated Caesars CEO Tom Reeg. “We wish all of them continued success under Bally’s ownership.”

The MontBleu’s real estate is owned by the Edgewood Companies. Last year, Bally’s confirmed last that it entered into an amended agreement with the landlord, including extending the lease term to the end of 2035.

The $80m Tahoe South Event Center is under construction adjacent to Mont- Bleu on land donated by Edgewood.

“This is a destination property and a first-class place to go in Nevada,” said Bally’s chairman Soo Kim in March. “This is an opportunity to have a destination for our customers from different parts of the country and have a resort experience like Lake Tahoe.”

Speaking during the company’s Q4 and full year earnings call at the start of March, Papanier characterised 2020 as an “incredible and transformative year” for the company.

“We continued our evolution from a single property operator in Rhode Island to a leading national player with soon to be 15 casino properties across 11 states, and a significant mobile and online presence,” he stated. “Our primary goal is to continue to work to become the premier, truly integrated omnichannel US gaming company with a B2B2C business model, and we feel that we have taken the necessary steps to best position the company to achieve that target.”

The MontBleu acquisition is just one of a number of recent transactions Bally’s has made with Caesars, following several other deals last year. On 9 November, the company formally announced that it changed its corporate name from Twin River Worldwide Holdings to Bally’s Corporation after purchasing the brand from Caesars. The operator said the name change represented part of its “unified branding initiative, which complements the considerable geographic growth and operational improvements the company has achieved in 2020”.

In the same month, the company announced the closing of its $25m acquisition of Bally’s Atlantic City Hotel and Casino from Caesars and real estate investment trust Vici Properties. Bally’s Corp. confirmed in April that it would work collectively with Sinclair Broadcast Group to produce sports wagering content that would air during nongame windows on the firm’s 19 networks. As part of their “long-term media partnership”, the casino operator rebranded Sinclair’s regional sports networks under the Bally Sports name earlier in the month. The two companies will work together to produce and broadcast the content on the Bally Sports networks. The financial terms of the deal were not disclosed.

Bally’s chairman Soo Kim said the programming would create “innovative ways to allow fans to further engage with the Bally’s brand.” He highlighted that “engagement opportunities” would change a fan’s viewing experience. “The gamification of live sports is the next phase of interactive gaming, and we look forward to continuing to create lean-in experiences for sports fans across the nation as our content strategy continues to expand,” Kim stated.

The companies also said they would also look at opportunities to include Bally’s programming in other Sinclair-owned media platforms and affiliates, including Sinclair’s Tennis Channel and Stadium, a 24-hour multi-platform sports network.