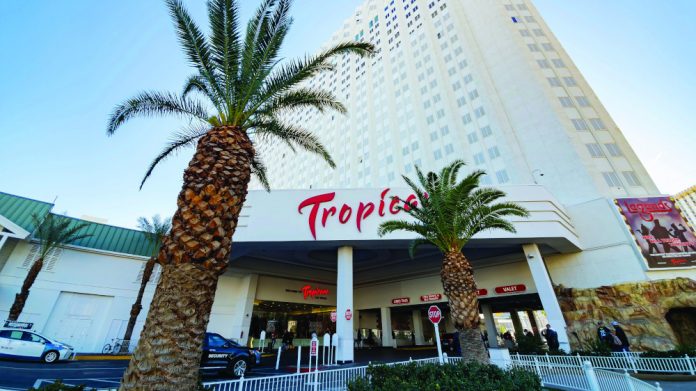 Bally’s chairman Soo Kim affirmed that it was “very important for a casino operator with national ambitions to have a Las Vegas presence on the Strip”, while the firm’s president and CEO George Papanier said the deal will enhance the company’s customer base and player database.

Bally’s Corp is set to acquire the Tropicana Las Vegas from real estate investment trust Gaming and Leisure Properties in a $308m deal. The transaction is expected to close early next year.

“Landing a preeminent spot on the Las Vegas Strip is a key step for us,” George Papanier, Bally’s president and CEO, said in a statement. Bally’s – which is unaffiliated with the Strip property of the same name – will purchase the Tropicana’s nonland assets for $150m. GLPI will retain ownership of the land underlying the property and lease it back to Bally’s for an initial term of 50 years at $10.5m in annual rent.

“This was a classic Twin River- Bally’s transaction. We were able to get a quite important property in an efficient manner,” said Bally’s chairman Soo Kim. “It’s very important for a casino operator with national ambitions to have a Las Vegas presence on the Strip.”

Papanier reported that the company is looking at a “significant redevelopment” of the 1,470-room property.

“The Strip is visited by over 40 million players and guests per year, which we believe will significantly enhance Bally’s customer base and player database, as well as unlock marketing opportunities to leverage the iconic Bally’s brand,” he continued. “This expansion will also support the growth and development of our online and interactive business.”

Sara Slane, a gaming consultant and distinguished fellow at UNLV’s International Center for Gaming Regulation, suggested that despite the business impact of the pandemic, having a presence in Las Vegas will pay dividends for Bally’s.

“You can’t underscore or undersell the value of the customer database in Vegas,” she said. “Having a presence in Las Vegas as part of your omnichannel portfolio makes sense. I always will remain bullish on Las Vegas, it’s just so hard to compete with all the offerings that the city has.”

Bally’s will be taking over operations at the Tropicana from Penn National Gaming, which sold the land under the property to real estate spinoff GLPI for $307.5m in April 2020. Penn National agreed to operate the company for two years or until the land and casino were sold.

“[The Tropicana] was seen as a cut above other places and a little more intimate,” said gambling historian David Schwartz, a former director of the Center for Gaming Research at the University of Nevada, Las Vegas. “It’s one of the most storied properties still open today. With the development around it, it has always been seen as a place you could do something bigger.”

Bally’s Corp and global online gaming operator Gamesys have agreed definitive terms on the combination of the two businesses in a $2.7bn deal. Per the announcement, made under Rule 2.7 of the UK Takeover Code, Bally’s is to acquire Gamesys’ issued and outstanding share capital via Premier Entertainment, its wholly-owned subsidiary. “We believe that this combination will mark a transformational step in our journey to become a leading integrated, omni-channel gaming company with a B2B2C business,” said Bally’s chairman Soo Kim. “We think that Gamesys’ proven technology platform alongside its highly respected and experienced management team, combined with the US market access that Bally’s provides, should allow the combined group to capitalize on the significant growth opportunities in the US sports betting and online markets. “We are truly excited about the opportunities that this combination would offer and the enhanced and comprehensive experience and product offering that it would enable us to offer our customers,” he added.

Gamesys CEO Lee Fenton, who will become group CEO once the deal completes, said the merger would give the company “an opportunity to fully leverage the technology, product and know-how we have developed in what will become the largest regulated online gambling market in the world”. “I believe the highly complementary nature of our companies and the common history of being highly cash generative will leave us uniquely positioned for success,” he stated.