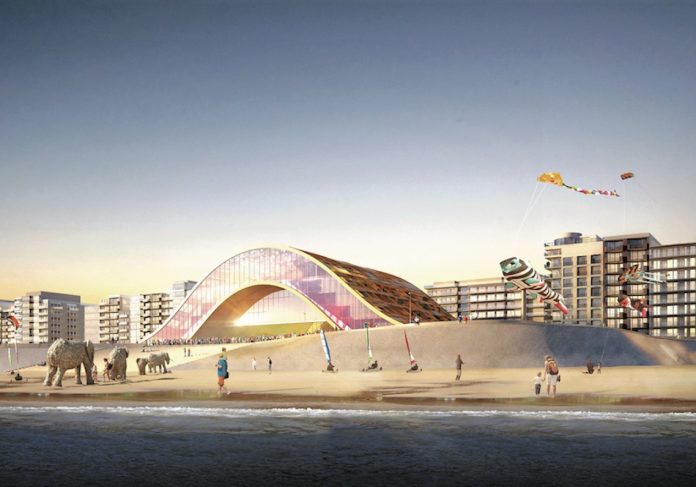 After a lengthy court battle, Waterland Private Equity’s plans for a glass, arch-shaped casino have been approved.

Waterland Private Equity is set to develop a “futuristic” new casino complex on the Belgian coast, following approval from the Council of State, Belgian’s supreme administrative court, following a legal challenge regarding the licence tender process.

The plans came as part of the announcement that the private equity firm will take over the operation of Middelkerke Casino’s licence in September with a 15-year permit through its Belgian subsidiary Napoleon Games.

The Council of State’s decision comes after months of debate over the future of the casino complex. The court approved Napoleon Games’ plans after they were deemed “financially balanced.”

The mayor of Middelkerke, Janna Rommel- Opstaele, hopes the new construction will represent a new landmark for the Belgian coast.

“We are extremely satisfied. This can only benefit our citizens, businesses and tourists,” she said. Speaking about the decision from the Council of State, the mayor said: “The main concern was employment, and the fact that the municipality of Middelkerke wants to see no interruption in the operation of a casino.”

“After a long legal battle, this is a relief. I would like to emphasise that the construction of this new casino to Middelkerke will not cost the taxpayer anything. The design will certainly be unique,” she added.

The complex is located five kilometres from Ostend-Bruges International Airport on the coast of West Flanders. The Dutch firm said it would close the existing casino on the seafront and develop a “futuristic”, arched casino complex, rising 20 meters in height to form a “glass wave” in the centre of Epernay Square.

A 1,200-square metre event area will be housed under the arch, designed for year-round usage. Plans also include a multipurpose 650-square metre room for commercial uses at the foot of the arch. There will also be a three-storey hotel with 60 rooms, a restaurant and a sky bar, while visitors will be able to to reach the summit of the building using a lift that moves diagonally.

Napoleon Games struck a partnership deal with a joint consortium between BCS Investissement and Willemen Real Estate to construct the new casino and fund the project as part of a private-public partnership.

The new complex, which is expected to open in 2019, will cost E30m and generate 200 new jobs at the casino.

During the two-year construction of the arch, the casino will be relocated to a temporary venue, yet to be announced. Waterland previously hoped to renovate the old casino until it emerged that such plans proved too costly.

The current complex will remain open until August. Napoleon Games now has two of the nine Belgian A casino licences, having already bought the nearby Knokke Casino in 2013.