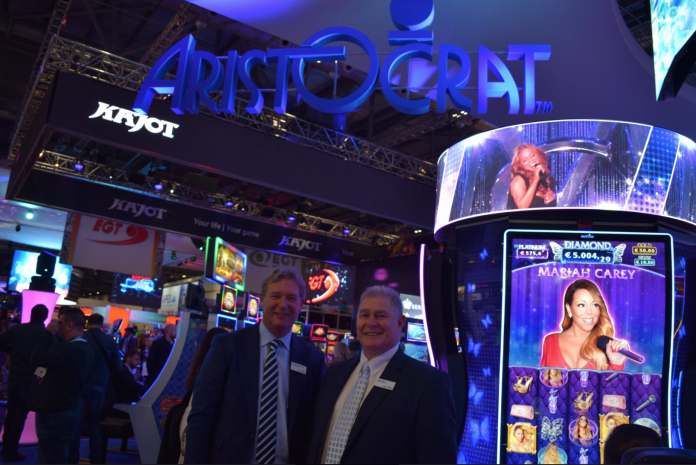 Aristocrat presented its Mariah Carey theme on the Flame55 cabinet, alongside the EMEA release of its new Helix+ cabinet and a broad range of for-sale and licensed offerings s at ICE 2018.

Aristocrat presented its leading gaming content and innovative hardware solutions at ICE 2018, unveiling a broad new portfolio for the EMEA markets and presenting its leading licensed themes and linked games.

“ICE 2018 has been great. We’ve been very busy from day one,” said James Boje, MD of Aristocrat EMEA. “Our product portfolio has attracted a lot of attention and we’re really excited about that.”

Leading the way amongst all the exciting concepts on display at the London show was the Flame55 cabinet, a large format cabinet featuring a 55” portrait double-curved screen, available in a variety of banking formats.

“Our Flame55 cabinet really brings something different to the market,” Boje stated.

“We’ve coupled that with our licensed Mariah Carey title, and it’s really an attractive package. It looks superb and it’s drawn a lot of attention at ICE.”

The Flame55 pipeline includes a sequel to the highly successful title Game of Thrones, along with a new title based on the highly acclaimed HBO series, Westworld.

Aristocrat also premiered Dragon Link to the EMEA markets. This title features an Arc Single portrait-screen with 1€ and 2€ added to the player-selectable multi-denomination options.

“Links are very popular across Europe and we are confident that our Asian-themed Dragon Link will also prove a very strong brand for us,” Boje stated. “Asian-themed concepts are doing very well in EMEA, and across the globe.”

The successful ‘Hold & Spin’ mechanic was also evident in the Mighty Cash game library, featuring licensed games Zorro, and Ted, with both existing standalone progressive games also being featured in the new multi-licensed Mighty Cash Link beside base game themes Elvira and Pan-Am.

Having successfully established itself in European and South African casinos as a world beater, the dual curved portrait screen Arc Double cabinet featured again at this year’s ICE, with a range of new game content, including My Cousin Vinny, Tarzan, and the X-Files, which features a unique X-shaped reel layout.

“With our customer-centric ethos, we look for content such as Tarzan and the X-Files that has global appeal,” Boje continued. “You might say that G2E in Las Vegas represents the start of our ICE campaign, as we take our customers’ feedback, which helps guide us in terms of the products that they would like to see in the EMEA markets.

“The profile of EMEA venues and the culture of play are different from the US, and the product portfolio we’re presenting at ICE takes those factors into account.”

Reflecting the theme ‘It’s all about what’s inside’, this year’s ICE saw Aristocrat celebrate the EMEA release of its new Helix+  cabinet, heralding the arrival of a vast array of new game content for 2018 with both proven and innovative new game mechanics.

Based on the same footprint as the Helix cabinet, Helix+ incorporates two 27” screens offering 40 percent more visible gaming space over its predecessor. Further enhancements include virtual button deck which comes as standard, along with a raft of improvements that have also been made to its security and serviceability.