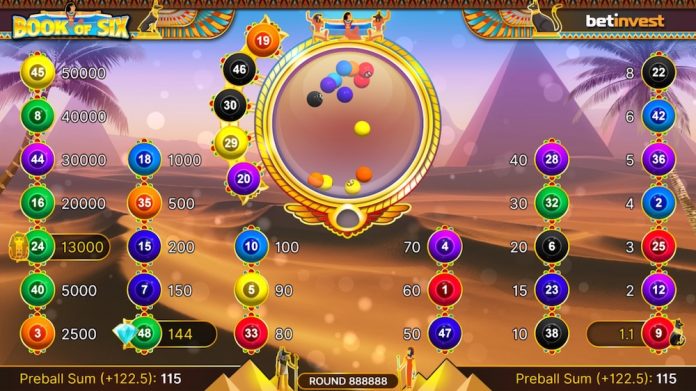 The mysteries of Egypt may have been solved if Betinvest Romania’s new draw-based virtual game, Book of Six, is anything to go by as the title prepares to make significant waves across web and mobile platforms as well as retail and terminal solutions via a recalibration of one of gaming’s most beloved Ancient Egyptian artefacts…

Book of Six is the latest title to be released by Betinvest Romania, delivering on both the company’s knack for player appeal as well the brand’s broader international strategy.

The interface of Book of Six is a nod to one of the world’s most popular slot games, Book of Ra, as this slot inspired Betinvest team to create visuals with a distinct Ancient Egyptian flavour.

Given that players can’t access slots in all countries, it was agreed to create a virtual game alternative to Book of Ra. That’s why this game will be of interest to Book of Ra fans. Moreover, games such as Book of Six are also ideal for ‘fast bettors’ as they allow you to play and grab a quick win within the space of 5 minutes, rather than waiting for the end of a match as with sports betting.

The rules of this game are quite straightforward.

In a round, 35 numbers are randomly generated from a range of 48 numbers. Each group is marked with a certain colour.

A player chooses 6 numbers and places a bet on them appearing in the 35 randomly-generated numbers. If this occurs, their bet is multiplied by the odds, shown next to the ball which was drawn last.

There are also available other bet types such as a sum of chosen numbers, colors of balls and even or odd ball number etc.

What’s more, Book of Six also features 3 special symbols – Tutankhamun, a cat and a diamond. They multiply a player’s winnings.

This game is currently waiting to receive the required certification from Gaming associates Europe LTD. Once this is granted, Betinvest will be able to work with this game in Romania and also in countries where Maltese licenses are legally valid.

By September, game will be integrated into company clients’ platforms. The game will be a smash hit in Romania, other Balkan countries and the former Yugoslavia.

Betinvest strives to provide its customers with the best products and services for development of their betting business. That’s why it was agreed to diversify and update product line with virtual game which has been tailored specifically to countries across Europe.

Book of Six has been developed over three consecutive months period but Betinvest is also focused on delivering enhanced content and new additions to the title following its release in order to maximise engagement and continue to deliver on its R&D aims.

As for potential future tweaks, Betinvest is going to add a progressive jackpot, which will be formed by taking a small percentage of every bet placed.

At the moment draws take place every five minutes, so, players can see where lady lucks takes them as many as 12 times in an hour.

Betinvest team will also work to fine-tune other bonuses in accordance with the needs of our partners and laws of various jurisdictions.