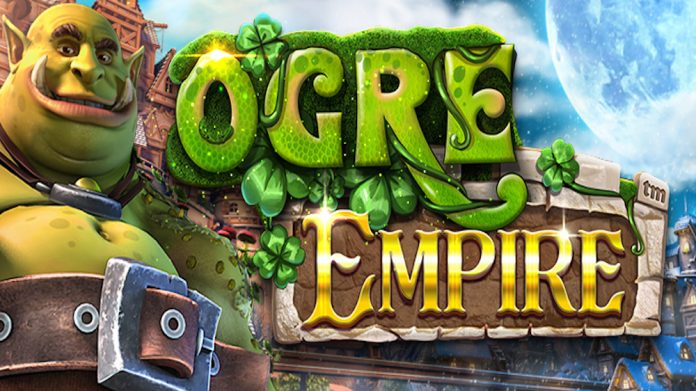 The seat of a fairytale kingdom, the setting for Ogre Empire was once known far and wide for its riches, so it was especially inconvenient when a large and rather grumpy ogre decided to perch on the rooftops of the square and start chasing away passing trade. It’s now up to players to sneak the biggest possible wins past him, with the promise of an extra royal reward for those who succeed.

Ogre Empire operates according to a unique day / night cycle, with different symbol sets and different multipliers available at different times. During the daytime, when the residents are kept indoors, the ogre surveys the market square and occasionally swings his club to trigger a cascade of symbols. While the sun is up, the default symbols (including toadstools, gemstones, and gold coins) are joined by royals engraved on shuttered windows. As night falls, the ogre drifts off to sleep, and the city comes alive. The king and queen fling open their shutters to become high-paying variants, and they are joined by a joker who serves as a wild symbol as well as adding a 2x multiplier to any winning line.

As well as showcasing detailed sunrise and sunset animations and advancing the story, changing the time of day in Ogre Empire has a serious impact on the paytable. Daytime wins award up to 4x the player’s total stake, while nocturnal wins increase that to 6x. Even the wilds themselves respond: during the day, the reels contain the Sun Bloom spreading wild, which expands naturally to turn up to three adjacent symbols into wilds. Under the moonlight, the flower changes to the glowing Night Bloom Wild, which can spread from its starting position to anywhere on the reels, without the two symbols needing to touch.

Betsoft has put players in charge of this central time-shifting mechanic. A fairly common, full-height, animated symbol triggers the change from day to night and vice versa. This alters the dynamic orchestral soundtrack and also pays out a direct money award – but only when it displays in its entirety.

“With Ogre Empire, our goal was to prioritise narrative, immersion, and entertainment,” explained Betsoft’s Head of Product Development, Dan Cooper. “We are particularly proud of the way that environmental art, audio, and our signature 3D graphics have come together to create a fantasy city that lives, breathes, and marches according to its own quirky beat. But at the same time, we were careful not to sacrifice slot thrills. From the unpredictability of the two varieties of spreading wilds, to our player-favourite double-up system, there’s no shortage of opportunities for significant wins.”

Developed for cross-device compatibility from day one, Ogre Empire is built on the Betsoft SHIFT platform. Designed to reduce file sizes, speed loading, and enable new gameplay and audio-visual experiences, SHIFT guarantees that the same great gameplay reaches players on whatever platform they choose.