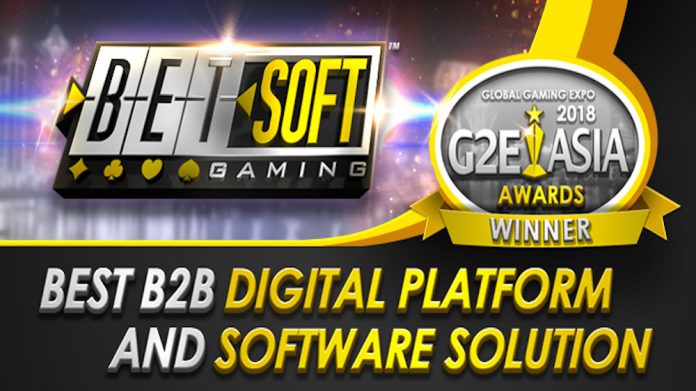 This year’s G2E Asia event ran in Macao, from 15 – 17 May, and competition was fierce – on the expo floor as well as in the prestigious category in which Betsoft emerged as winners. A major fixture on the two-day G2E Asia calendar, the awards are adjudicated by a panel of more than 50 independent industry experts.

“Betsoft has always exceeded players’ and operators’ expectations, but in the last year we have significantly increased the scale and scope of our innovation work and investment – in the games themselves, and in the systems and trademarked technologies that support them,” said Julian Camilleri, Betsoft’s Account Management Director.

Key judging criteria included the quality of providers’ content, cross-platform integration potential, innovation in themes and mechanics, the strength of B2B back office support, and consideration for new and emerging regulated markets. Betsoft popular products such as Slots3, Shift HTML5, Casino Manager, and its new proprietary Vault solution all helped in the push towards taking home the award.

“We are particularly honoured to have that hard work recognised by the independent judges at G2E Asia. This is a testament to the value proposition that Betsoft has long represented to its B2B customers around the world – something that has only become stronger in the last twelve months,” said Camilleri.

Andrew W. Scott, who serves as Chairman of the G2E Asia Awards judging panel, congratulated the company on winning the award.

He added: “The G2E Asia Awards are a first for the gaming industry – a true celebration of the very best on offer, as voted by an elite panel of 55 expert judges. By winning this award, Betsoft demonstrated the trust and respect its products have earned within the industry over the past 12 months.”