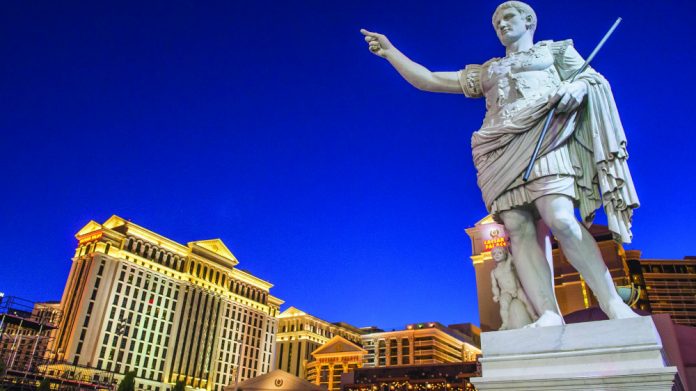 Following the William Hill acquisition Caesars has rebranded its sports betting operations and launched a new marketing campaign, while CEO Tom Reeg said it will likely sell one of its its eight Las Vegas Strip properties in 2022.

Caesars Entertainment executives marked a quarterly EBITDA record for the company, as it returned to profit for the first time since the start of the pandemic.

The company reported net income of $71m for Q2 2021, following a net loss of $423m in the previous quarter. Caesars posted $2.5bn in net revenue for the quarter which ended 30 June, compared to $127m for the same period in 2020 as businesses worldwide were forced to close their doors due to the coronavirus pandemic.

“There could be bumps along the way in terms of masks and protocols that we have to follow, but the demand is exceedingly strong and has continued to build. So, we feel good about where we are in the bricks-and-mortar business,” said Caesars Entertainment CEO Tom Reeg speaking during the company’s quarterly earnings call.

“We fully expect to remain in the low to mid-90s of occupancy in Vegas through this current situation with the Delta variant,” Reeg added.

Caesars reported same store adjusted EBITDA of $1bn, a quarterly record for the company. “When I spoke last quarter and threw out that I’d expect us to hit $1bn in EBITDA in a quarter in 2021, I wasn’t thinking it was going to be second quarter. I was actually thinking it would be [Q3]. So we’re a little bit ahead of schedule,” Reeg stated.

Nevada introduced an indoor mask mandate regardless of vaccination status at the end of July for areas experiencing high numbers of COVID-19 cases. The measure applies to Clark County, where the Las Vegas Strip is located.

Nevertheless, Reeg stated the impact of the new measure is not as significant as earlier restrictions and suggested the recovery will continue during the coming months. “What’s going on with the mask mandate is far less onerous than the restrictions we dealt with in the last quarter,” Reeg said.

With the William Hill acquisition now closed, the company has officially rebranded its sports betting operations to Caesars and launched a new marketing campaign at the start of August. The company currently operates sportsbooks in 17 states and Washington, D.C., 13 of which offer mobile sports betting.

“So what you’re going to see is us leaning the entire organisation into this vertical. Connecting to Caesars Rewards more than 60 million people, …[the] ability to earn and use points on or offline. We’re activating our player development teams across the organisation to sign up new accounts,” Carano explained. “We’re activating our entire workforce. Our frontline labour force will each have their own individual QR code, and will be able to sign up customers and be incentivised to help us do that.”

Reeg said that the company still intends to sell one of its eight Las Vegas Strip properties, a move that has been planned since Caesars Entrainment merged with Eldorado Resorts. “Nothing has changed there,” Reeg said. “We still expect to sell a Vegas Strip asset, and I would expect that sale to take place in 2022.”