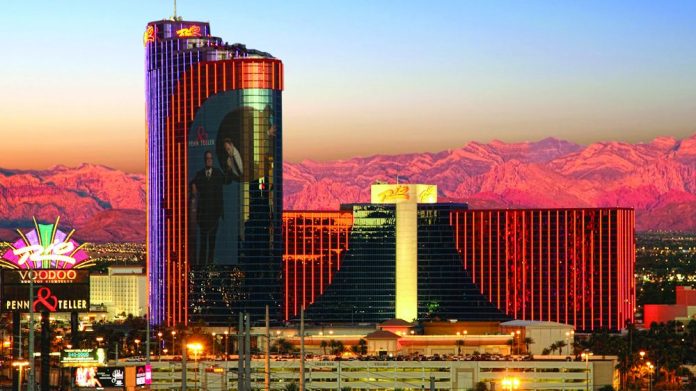 Caesars Entertainment has completed a deal to sell the Rio All-Suite Hotel and Casino to New York-based Imperial Companies but will continue to operate the Las Vegas property for at least two years.

Long-rumoured, the sale of Caesars Entertainment’s off-Strip Rio All-Suite Hotel and Casino was finally confirmed in late- September. “The rumours about this have been going on since about 2005, so it’s not at all surprising,” said David Schwartz, UNLV associate vice provost for faculty affairs.

The 2,500-suite Brazilthemed hotel and casino has been sold to New York-based Imperial Companies for $516.3m in a deal announced in a Securities and Exchange Commission filing on 23 September.

Under the terms of of the deal, Caesars will continue to operate the property for at least two years in a lease-back arrangement and pay rent of $45m a year.

Imperial has the option to pay Caesars $7m to extend the lease under similar terms for a third year and at the request of the buyer, Caesars may continue to manage the Rio or provide transition services for company.

The World Series of Poker, a staple at the Rio since 2005, is expected to move into Caesars new $375m, 550,000 sq ft Caesars Forum conference centre near The Linq Hotel in the future.

Nevertheless, the event will remain at the Rio next year.

“The retention of the World Series of Poker and retention of Caesars Rewards customers are all factors that make this a valuable transaction for Caesars,” Rodio added.

Deutsche Bank gaming analyst Carlo Santarelli characterised the sale as “a distinct positive for Eldorado-Caesars”. “[It] provides for healthy deleverage, while the net transaction multiple, in our view, is very strong,” he said in a note to investors.

It’s not yet clear what Imperial plans to do with the Rio in the future. “With the loss of Caesars Rewards and the World Series of Poker, we would expect Rio’s new owner to develop a new concept to help drive visitation,” said Barry Jonas, a gaming analyst with New York-based SunTrust Robinson Humphrey.

“This could be a number of things, but we would expect a focus on non-gaming amenities, a potential residential component, and perhaps partnerships with hotel and hospitality brands. “We don’t expect a full tear-down but could see meaningful (capital expenditures) as the property has been underinvested in for some time,” he added.

Led by founding partners Eric Birnbaum and Michael Fascitelli, Imperial Companies has primarily focused on mixed-use, residential, and hospitality businesses throughout the US.

“I think we’re moving into an environment where the ownership is going to be much more diversified than it is today,” Schwartz concluded.