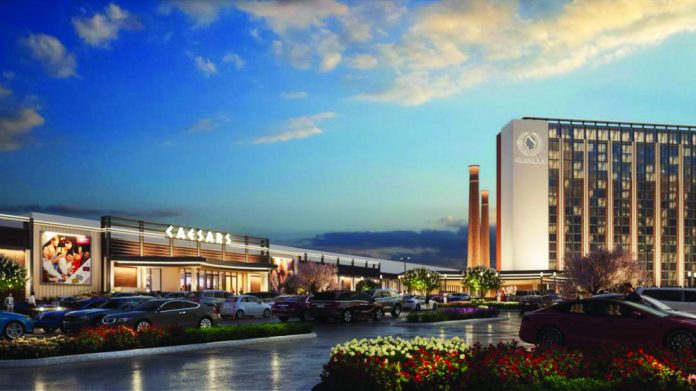 Caesars Entertainment unveiled its plans for its new casino resort in Danville, Virginia at a ceremony on 16 September.

“This is a milestone moment,” said Danville mayor Alonzo Jones. “There is great anticipation and excitement here.” Jones, together with members of Danville City Council, delegate Danny Marshall and other city and educational dignitaries were on hand as representatives of Caesars Entertainment shared slides of Caesars Virginia.

The $500m resort is expected to break ground by the end of the year and is scheduled to opening in late 2023.

“We started this design journey in January, and I read the development agreement over and over, which was our guardrails,” said Robert Livingston, SVP of development with Caesars Entertainment. “We have this iconic brand Caesars we have to live up to and then we have this rich history of Danville, Schoolfield and the Dan River Mill, and we have to blend all these together …that was the big challenge. “The biggest thing was that we had to listen and learn about this community, and hopefully you will see this in the renderings,” he added.

In August, the company reported that it would be upping its total investment by $100m to $500m, while it would also increase the number of rooms for the hotel portion of the project by 200 to a total of 500.

The casino will include more than 1,400 slot machines and table games, a Caesars Sportsbook and a WSOP Poker Room, Caesars confirmed. The resort will also feature 40,000 sq ft of meeting and convention space with an entertainment venue to accommodate up to 2,500 guests. There will also be a spa, pool area and fitness centre.

The company has yet to announce further details of the property’s food and beverage offering but Livingston suggested the resort may include multiple Gordon Ramsay branded restaurants.

“We are looking forward to making you proud as we build this casino,” he said. “We’re excited to be here, and it’s an exciting time for Danville and this part of the country.”

The project will see the creation of 900 construction jobs, together with 1,300 jobs once the resort is operational.

Dave Howryla, president of architecture with Marnell Companies, explained the architectural firm had strived to incorporate the Danville site’s industrial heritage in the design. Marnell obtained photos of the former brick mill building at the site and used them for inspiration.

“The Three Sisters [three brick smokestacks] are the best element on the site, and everything is based on them. They will be cleaned up and they will be the focal point,” Howryla stated.

Reflecting this, the 18- story hotel has been kept lower than the Three Sisters, while a four-storey parking garage will utilise the terrain so that it appears to be only two storeys.

“Marnell pulled it off. We built a team and blended culture,” said Livingston. “That was the most challenging and the most rewarding, and we are looking forward to the next step.”