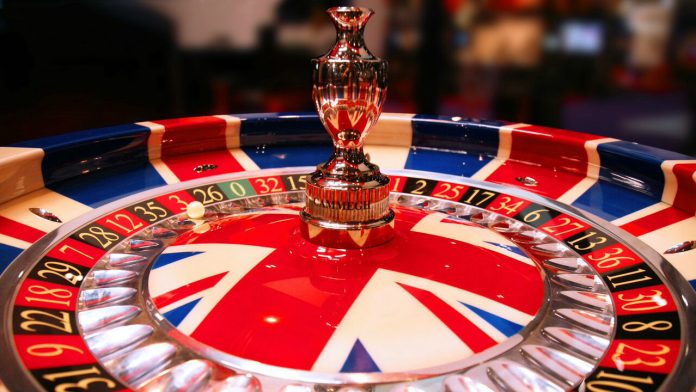 Cammegh was flying the flag at September’s G2E Las Vegas with a customised Union Jack wheel as the company saw another strong show, receiving orders from a number of new territories.

“Walking the Strip you’ll see some of the most experienced, knowledgeable operators in the business endorsing Cammegh as their supplier of choice for roulette wheels and displays,” said Andrew Cammegh, the company’s sales director.

“We’ve seen a flow of visitors to our stand all fully appreciative of the difference Cammegh products are contributing to the amazing casino environment in Las Vegas.”

We saw so many potential customers come to the stand because they recognised the brand and then stay because of our fabulous range of products.

Cammegh had specially created a Union Jack wheel as a fun talking point for the exhibition – taking several orders too – and the company also saw significant interest in their roulette sidebet, Spread Bet Roulette.

Another product which was not on display at G2E, but on the floor of the adjacent Venetian casino was a hot topic of conversation at the show; a triple zero roulette wheel.

The wheel allows the Venetian to offer its lowest minimum of $10 on the casino floor, providing a solution in an environment that might otherwise be outside a player’s budget – however it was a controversial topic for European visitors.

“I doubt we’ll be seeing the roll-out of a triple-zero wheel in every market,” said Andrew Cammegh. “But at a particular price point for a certain demographic, players can enjoy a wonderful roulette experience at the Venetian, both in terms of dealing and world-class equipment.”

Since acquiring a supplier’s license for the Nevada market six years ago, Cammegh has steadily and consistently increased its marketshare with the placement of roulette wheels and displays with blue-ribbon gaming establishments on the Las Vegas Strip, including: The Venetian, Palazzo, MGM Grand, Aria, Bellagio, New York, New York, Monte Carlo and the Cosmopolitan.

At the show, the impact of Cammegh’s footprint in Vegas effervesced into brand new territories for the company with a number of  attendees from Central and South America, unfamiliar with the brand and quality of products drawing inspiration from the Strip which acted as a giant ‘virtual’ showroom for Cammegh’s  products on the exhibition’s doorstep.

“G2E is a great draw, not just from the US and Americas, but customers from Australia, South Africa and Europe came to establish and cement new and existing relationships with us at the show,” added Andrew Cammegh. “We saw so many potential customers come to the stand because they recognised the brand and then stay because of our fabulous range of products.”

Cammegh increases its presence in the global market

During G2E the company also saw orders from Europe, Las Vegas, Manila, Australia and Norwegian Cruises Lines, who have chosen Cammegh wheels to outfit its fleet of cruise ships.

In the UK, Cammegh is currently outfitting Global Gaming Ventures’ forthcoming casino in Leeds, supplying both wheels and displays.

During the show Cammegh met with Holland Casinos, having won its tender in the summer to supply 90 roulette wheels and displays to the Dutch casino operator, another endorsement of the market-leading quality of Cammegh’s product range.

Over in the Asia-Pacific region, in the Philippines, Cammegh is supplying 22 themed wheels for Okada Manila, the third integrated resort to complete the Entertainment City in Parañaque, while in Australia, Cammegh is working with The Star in Sydney to replace signage across the floor and with Crown Casino Melbourne to launch a trial of Spread Bet Roulette.