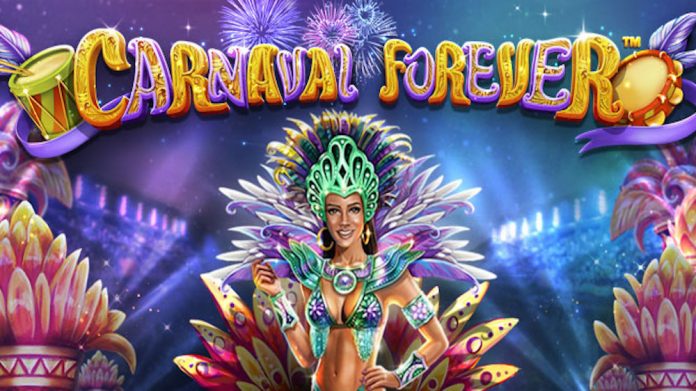 Carnaval Forever centres on the stunning Carnaval Queen – a special symbol that parts the crowds and carries free spins in her glittering wake. Players who find more than three Queens in a single spin will earn an allocation of up to 9 free spins.

Designed to capture the captivating spirit of the Rio de Janeiro carnival (or “carnaval” in Portuguese,) Carnaval Forever paints the procession in bold strokes. From the parade of beautiful people and ornate floats, to the pulsating music and the crowd of millions, Carnaval Forever bottles the vibrant energy of the streets in every spin.

Like the festival itself, Carnaval Forever is an inclusive game, opening up the carnival spirit to all kinds of players. Symbols are clear, wilds can appear in stacks, win lines are easy to identify, and Betsoft Gaming’s signature feature-buy-in-mechanic allows players to access the free spins feature at any time. The game also incorporates a dedicated symbol that tracks over the course of multiple play sessions, reducing the cost of buying into free spins in increments, and dropping as far as zero if the player accrues enough coins over time.

“The Rio carnival is known worldwide for bringing people together and uniting them with the power of music and dance, so we set out to recreate that feeling with Carnaval Forever,” explains Annamaria Anastasi, Betsoft’s Marketing Director. “In order to give the scale and the excitement of the event justice, we pursued a new level of excellence in the game’s audio-visual presentation, and struck a careful blend between accessibility and depth in its features and mathematics. We’re proud to say that the finished game matches our ambitions, and Carnaval Forever will slot into any operator’s portfolio as a compelling experience, with significant win potential and a soundtrack that will have players jumping to their feet.”