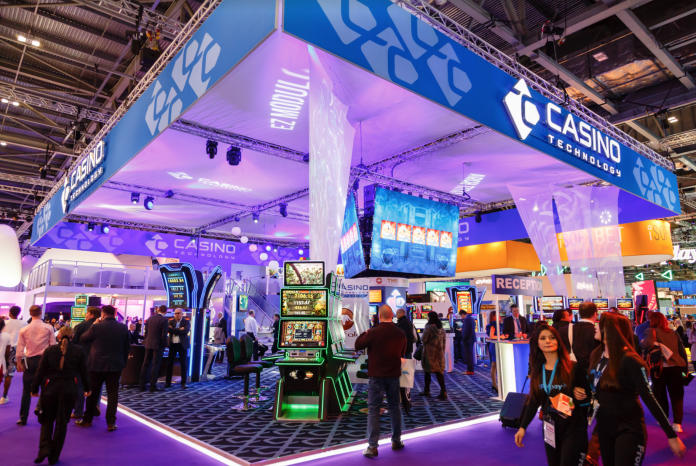 Casino Technology presented a panoply of innovation for ICE 2018, including a new version of its EZ Modulo slot machine with twin 32” HD monitors, a new game package, Gorilla Wheel, and the Tower 102 game mix.

Bulgaria-based Casino Technology celebrated another successful edition of ICE, with the company’s management and sales team making multiple agreements for new installations at the show.

“We are building on several deals made during the show and we are excited with the broad positive response our products received,” said Elena Shaterova, Casino Technology’s global sales director.

“We are happy that our solutions cover a wide range of customers and satisfies the preferences of different markets globally.”

Taking centrestage at ICE was the EZ Modulo series of slot machines, presented with the latest game packages specially developed for the cabinet.

“With the EZ Modulo slot machine we are well-placed to deliver meaningful innovation and market-specific content for licensed jurisdictions,” Shaterova added.

EZ Modulo is also available with the Speed King multi-game package, which is offered with 20, 40 and 60 titles, including player-favourites such as Duck of Luck and Coffee Magic.

Both game packages are also available with the 2017 model of EZ Modulo with 27” HD monitors.

Casino Technology also showcased its Tower slant top, which features a 43” monitor with 4K resolution, while the company confirmed that the cabinet will be deployed in Romania, Georgia, Sri Lanka, India, Cyprus, Cambodia, and Macedonia this year, following significant interest at the show.

The cabinet demonstrated a new game mix, Tower 102, which reportedly received “excellent feedback” at the show.

The new multigame title is a continuation of the successful Tower 101 multigame which has seen strong results on floors in both Europe and Latin America.

Featuring 20 or 40 game titles, the Tower 101 series includes free games with frequent restarts, super games, additional Wild Symbols, and attractive winning combinations, in addition to the standard winning lines, which can multiply to fill the whole screen with the same symbol.

“At ICE 2018 we featured innovations that leverage emerging technologies to create exciting experiences and spark interest from a broad demographic of players and operators on different markets,” stated Rossi McKee, VP of Casino Technology.

“At the trade show we have drawn our road map that states our firm intent to move successfully ahead to the 20th anniversary of Casino Technology next year.”