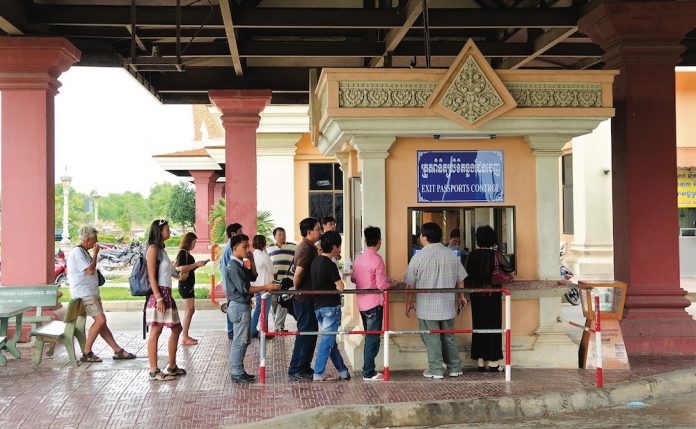 A Vietnamese firm is making good progress on its multi-million dollar casino resort project in Cambodia. Pressed close up to the border of Vietnam, the casino has high hopes of luring Vietnamese gamblers. The casino story, however, is not so positive on the country’s other border with Thailand.

The 124 acre entertainment megapolis will be based in Bavet, the largest city in Cambodia’s Svay Rieng Province, which straddles the country’s border with Vietnam. Built through Virtue Resources fully-owned Malaysian subsidiary, VR Capital Holding Sdn Bhd, construction is expected to take a decade, with the first phase of development aiming for completion in 2019.

The $200m site will encompass a casino, a hotel and resort, online casino hub and a shopping mall, along with a water show arena, creating at least 3,000 local jobs.

“We are building this mega project because we saw the potential of economic growth in Cambodia for the next ten years,” stated Mr. Chew, group CEO at Virtue Resources. “We believe that Empire World city will boost the local economy by attracting neighbouring Vietnamese into the city.”

Although gambling is illegal for local Cambodians, casino strips are prevalent between border checkpoints, allowing foreign nationals to gamble unfettered by visa restrictions, with the venues generating more than half of Cambodia’s $37.4mi in gambling tax revenue.

“They nickname Bavet ‘casino city’,” said Jonny Ferrari, a gaming industry consultant based in Cambodia. “Every day, it is only Vietnamese coming in – in and out, in and out, all the time.”

“Slow development is not necessarily a bad thing,” commented Ros Phirun, deputy director of finance at Cambodia’s Ministry of Economy and Finance (MEF).

“As those that try to build too quickly can only capture the low and medium gaming segment.

“A longer timeline will allow it to slowly capture the high-end market. And even if it doesn’t capture the highend market, the development could be profitable by operating online gambling websites because that is a worldwide industry.”

While relations between Cambodia and Vietnam remain cordial, tension mounts between Thailand and Cambodia. Back in April, Thai tourists eager to get to Cambodia’s new Saitaku Resort and Casino were blocked from crossing the checkpoint by Thai soldiers.

Thailand does not allow casino gambling within its borders, a prohibition that has benefited Cambodia’s thriving border casino economy. The Thai military has remained tight-lipped about the situation, claiming that it is following normal procedure.

Cambodian officials retaliated to the move in mid- April by preventing their citizens from entering Thailand to buy goods, wreaking havoc with non-gambling merchants on both sides of the border who depend on tourism for their business.

A recent report in The Bangkok Post cited Santi Uthumporn, mayor of Tambon Chanthop Phet Municipality in Ban Kruat district who confirmed that “trade had plunged from several million baht a week to almost zero”.

The confrontation was sparked by Thai anti-corruption activist Veera Somkwamkid’s claims that the Saitaku casino was located inside the confines of a Thai national park.

Although the region has been the subject of numerous border disputes between the two nations over the years, Thailand’s National Parks Department confirmed that the casino was clearly on Cambodia’s side of the dividing line.