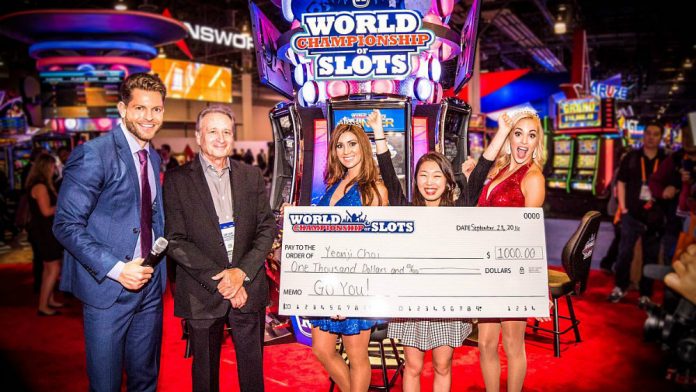 G2E 2016 was the perfect opportunity for the Novomatic Group to present its latest efforts in North America through its subsidiary Novomatic Americas.

[dropcap]A[/dropcap]t this year’sG2E in Las Vegas, Novomatic Americas’ exhibition booth increased in size to make way for the vast array of product innovation on display for both North American and international markets, as well as dedicated areas for Greentube, Octavian, NSBS and NLS. Representatives from the US, Canada, Latin America, Europe and Asia were all at the show to present the latest developments and meet their respective customers.

Novomatic Americas created maximum impact at G2E, driving people to the booth from around the show floor throughout the three-day event. The centrepiece of the exhibit was the World Championship of Slots (WCOS) that generated a huge buzz with operators watching the tournaments and understanding how to utilise this never before seen concept on their casino floors. A tournament took place every hour of the show and the surrounding area was bursting with excitement as attendees wanted to try their luck on the games.

WCOS is an industry-first slot competition format produced in collaboration with Emmy award-winning game show producer Gary Hunt Productions, Entropy Entertainment and media sales company Trifecta Entertainment & Media that gives players the chance of winning up to $1 million on a national TV show, as well as offering sponsor casinos a unique marketing opportunity with reach into more than 85 million homes. Casinos are empowered to host their own qualifying events as often as they like, and the winners are eligible to move onto the WCOS television show qualifying events.

Speaking from the show floor, Gary Hunt said: “This is a first-time event where people who love playing slots will have a television show that they can enjoy. We will also be able to find people who are watching at home – who have never played slot machines before – and they will have the chance to see what fun they’re missing.”

A testament to the significant progress made by Novomatic Americas over the past year, 40 slot titles dedicated to the US market were shown at G2E, developed in cooperation between Novomatic game studios in Illinois, Austria as well as other international competence centres. Of particular interest was the premiere of the Tales of Darkness – a series of four linked progressive jackpot games. US-developed Jackpot Edition titles from the award-winning NovoLine Interactive portfolio were also demonstrated on the V.I.P. Lounge and Dominator Curve cabinets.

Visitors to the Novomatic booth could not miss the eye-catching display of V.I.P. machines that have been creating Very Important Experiences for casino operators worldwide. Together with the return of the Novostar V.I.P. II to G2E, the Novostar V.I.P. III, Novostar V.I.P. Royal and V.I.P. Lounge were being shown for the first time in Las Vegas. Additional cabinets presented for Latin American and international markets were the Gaminator Scorpion, Executive SL multiplayer terminal and Novostar II.

Harald Neumann, CEO of Novomatic, said: “G2E 2016 was a clear demonstration of Novomatic’s progress in North America and the excellent collaboration between our teams throughout the world. We are building a very strong company in the US and our products specific to the US market on display this year further boosted Novomatic in the region.”