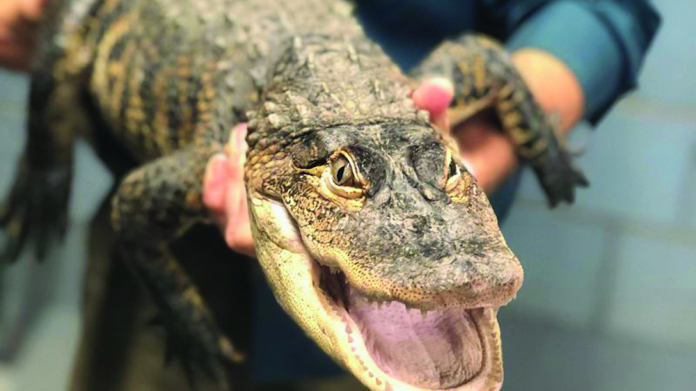 A rogue alligator recently captured in the Humboldt Park lagoon serves to highlight the importance of location when it comes to choosing a site for Chicago’s new casino, Edward Lowton suggests.

The story of a diminutive alligator taking up residence in the Humboldt Park lagoon touched the hearts of Chicagoans this July.

Dubbed Chance the Snapper in a Block Club Chicago poll – although Casino Review’s preferred choice was Frank Lloyd Bite – the four foot reptile captured the Windy City’s imagination and was the subject of national news coverage.

After he was spotted swimming in the lagoon on 9 July, Chance – thought to have been an illegal pet – sparked a frantic search which saw sections of the park being closed off.

Having inspired a diverse range of merchandise including a bobblehead figurine and Humboldt Gator, a locally brewed beer, Chance has now been safely re-homed at the St. Augustine Alligator Farm Zoological Park in Florida, while experts suggest that had he stayed in the lagoon he likely wouldn’t have survived the low winter temperatures.

The story serves to highlight the significance of location and by a circuitous route brings us round to the question of just where to situate Chicago’s new casino concession.

The city is currently awaiting the results of a feasibility study by investment bank and advisory firm Union Gaming Analytics, due in two weeks, to determine the best location for its first casino. At present there are 10 casinos in Illinois but the passage of Senate Bill 690 on 28 June, opens the door for six further licences, including Chicago, along with the addition of slot machines and table games at horse tracks, and the legalisation of sports betting statewide.

At mayor Lori Lightfoot’s first City Council meeting on 29 May her floor leader, alderman Gilbert Villegas included the prospective casino among “the big issues that are looming over the city”.

On 17 July, her administration released five possible locations, situated in outlying and economically depressed South and West Side neighbourhoods. Those options evoked her spring campaign commitment of using a casino as a way of boosting economic development in struggling neighbourhoods. However, a day later in a politically savvy move, she clarified that a downtown site still isn’t “off the board”.

“This is not the definitive site list. We will come to that place only after we see what the feasibility study tells us,” she said. “And if the feasibility study comes back and says you can’t, no matter where you are, you can’t fund and finance this casino because the economics don’t work, then we go again to the General Assembly and work on getting that right first. We have to get the economics right before we talk about specific sites, what the concerns are.”

Writing in the Chicago Tribune, Kristen McQueary contends that of the five sites proposed so far, the most suitable location would be the former Michael Reese Hospital campus.

McQueary argues that the site, situated in the Bronzeville district, near to the city centre, is close enough to the conventions and downtown to attract “tourists and revelers”, while “play-all-day seniors” are unlikely to want the hassle of travelling to less accessible areas of the city.

However this idea is not without its issues. The site, just west of South Lake Shore Drive, is already part of a larger proposed mixeduse development, called the Burnham Lakefront.

A group of developers led by Farpoint Development and Draper and Kramer is in the process of buying the land from the city, although this sale has not yet been finalised and the companies would still need to secure zoning approval.

Additionally, the possibility of situating a casino at the Michael Reese site already faces opposition from the Bronzeville alderman, Sophia King, who claims her constituents are opposed to a hosting a gaming venue.

She acknowledged that if “the economics don’t work” for a casino operator, the state and city governments won’t see the revenues they anticipate.

On a similar note, a separate oped in the Chicago Tribune pointed out: “Casino operators aren’t neighbourhood improvement societies. They’re businesses, each looking for the most lucrative return on their investments”.

It’s an established fact that casino can be important engines for economic development, creating jobs and raising tax revenue for their host communities.

Nevertheless, taking an “if you build it, they will come” approach might have worked for Kevin Costner’s character in Field of Dreams, but relegating a casino to an out-ofthe- way location or an unattractive area doesn’t seem like a sure-fire recipe for success, especially for such a significant project.

Fortunately, it seems likely that clearer heads will prevail, with Las Vegas-based Union Gaming’s feasibility study sure to recommend the most economically viable site, rather than the politically expedient one, while, for the moment, mayor Lightfoot looks to be taking a pragmatic position.