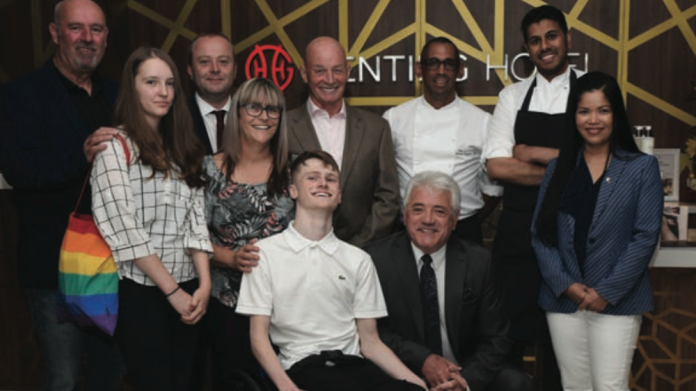 Steven Chrich was presented with a self-propelled wheelchair, courtesy of Genting Casinos UK and CHIPS – the charity founded on behalf of the casino and gaming industry that raises money to provide specialised wheelchairs for young people with disabilities.

17-year-old who suffers Friedreich Ataxia has been presented with his very own self-propelled wheelchair by England football legend Kevin Keegan, courtesy of CHIPS Charity and Genting International Casino.

Steven Chrich, from Beechdale, Nottingham in the UK, is a full-time wheelchair user and has Friedreich Ataxia. The condition causes progressive damage to the nervous system and affects coordination and can cause fatigue.

The 17-year-old is currently studying science and sociology at Sixth Form and has always had aspirations of becoming an architect. However, 12 months ago his condition caused serious damage to his optic nerve which has meant he has had to re-think his plans. The new wheelchair he has received is lightweight, making it much easier for him to get around and providing him with some much-needed independence.

The funds raised to purchase the wheelchair were raised through the Hamad Al- Sabah golf tournament. The tournament saw Genting Casino and several other London Casinos compete at The Grove, Hertfordshire in September last year. The money was raised through donations by Hamad Al-Sabah and all the casinos involved.

£15,500 was raised in total at the golf tournament and donated to CHIPS – a charity founded on behalf of the Casino and Gaming Industry that raises money to purchase specialised wheelchairs for young people with disabilities – and Steven, along with another young person in Leicester, were selected as the recipients.

Phil Nunn, director at The Palm Beach Casino, said, “On behalf of everyone at Genting UK I would like to take this opportunity to say a huge thank you to everyone who was involved in the golf tournament and helped to raise such and incredible sum of money.

“Genting Casino UK and CHIPS have, yet again, done a fantastic job of providing a young person with a self-propelled wheelchair and we hope it will give Steven the independence he deserves.”

Susan Chrich, Stevens mother, said: “The day itself was amazing, the staff and everyone involved were absolutely lovely and we were made to feel very special.

“Steven is absolutely loving his wheelchair, It has made him feel more independent and that’s always something that helps someone with a disability.”

Linda Lindsay, CHIPS Charity co-founder said, “It is absolutely fantastic to see Steven presented with this very own powdered wheelchair by the England legend, Kevin Keegan. It’s always a pleasure to be able to present such a positive young boy with a wheelchair that will make a real change to their life.

“I would like to say a huge thank you to everyone who was involved in the fundraising and helped to make the presentation possible, it is hugely appreciated.”