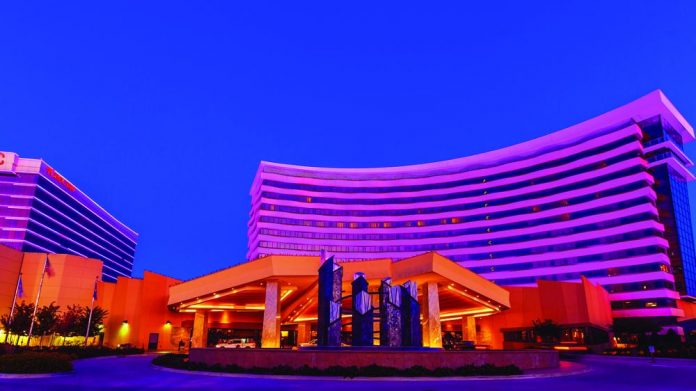 The Choctaw Nation is developing a $500m expansion to its casino resort on the Texas-Oklahoma border. The project will see the addition of 1,000 hotel rooms to the Choctaw Casino and Resort, along an expanded gaming floor and other amenities.

The Choctaw Nation of Oklahoma began work on an expansion project at its resort property in Durant, Oklahoma in late April.

The project – set to open in spring 2021 – will see the construction of a 19-story tower and see the addition of 1,000 hotel rooms to the Choctaw Casino and Resort. The development will bring the property’s total rooms up to more than 1,600, making it Oklahoma’s largest hotel in terms of accomodation.

“Today is a special day for the Choctaw Nation as we embark upon an expansion journey that will result in a top-tier entertainment offering for our region and will spur economic growth for Durant and our state, plus new employment opportunities for our tribal and community members,” said Gary Batton, chief of the nearly 200,000-member Choctaw Nation of Oklahoma. “The expansion will go a long way in meeting the demands of our growing customer base by delivering exciting new enhancements and luxury amenities for all who visit.”

The tribe plans to invest more than $500m on the project, the fourth expansion since the original casino opened in 2006. In addition to the increased room capacity, the plans will see an expanded gaming floor and fresh amenities including new swimming pools, a parking garage, retail space, and additional entertainment options and dining venues.

Tribal officials estimate that the expansion will create a 1,000 new jobs in Durant, joining the 2,800 workers currently employed at the casino resort.

“The Choctaw Nation’s latest expansion in Durant will elevate the resort and gaming experience in Oklahoma to the likes of which are typically found only in Las Vegas,” said John Tynan, chairman and CEO of TynanGroup. “With a focus on the benefits this project will bring to the Choctaw Nation, the City of Durant, as well as the entire region, the Choctaw Nation has assembled a world-class team to build this mega-project. Tynan- Group is proud to be working closely with the Choctaw Nation on this expansion.”

In the 2018 budget year, businesses operated by the Choctaw Nation generated nearly $1.5bn in revenue, while the tribe currently operates 18 casino locations in Oklahoma.

The first Choctaw Casino in Durant opened in 2006, consisting of more than 100,000 sq ft. In 2010, the tribe expanded and added the Grand Tower. The most recent renovation was complete in 2015, adding another hotel tower with a spa, The Grand Theater and the family entertainment centre, The District.