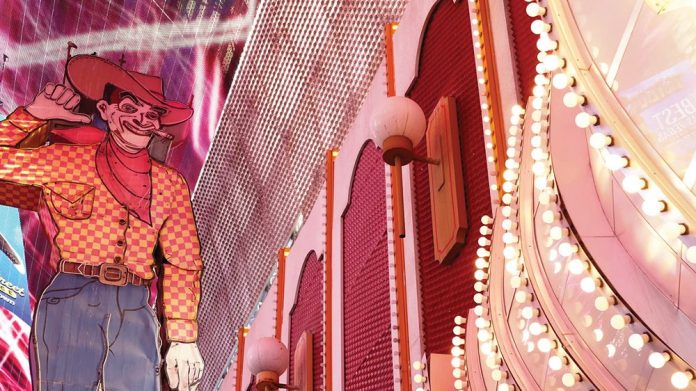 Downtown Las Vegas’ first new resort since 1980, Circa Resort and Casino launched gaming, together with its sportsbook and other amenities at the end of October, while the hotel portion of the property is set to open in December.

Circa Resort and Casino opened its doors on 28 October, the adults-only property is downtown Las Vegas’ first newly built resort in four decades.

The property’s developer Derek Stevens sought permission from Nevada regulators for a two-tiered opening, with the casino, sportsbook, restaurants and year-round pool complex launching this October, and 512 of the total 777 rooms and suites introduced in December.

“Because of what’s happened in 2020, it’s probably more impactful,” Stevens said. “Fifteen hundred people are coming back to work in a period of time when we gotta get people back to work.”

Speaking before the Nevada Gaming Control Board back in September, the entrepreneur said he discussed the plans for Circa with all his downtown resort neighbours, including Golden Nugget Las Vegas owner Tilman Fertitta, executives from Boyd Gaming, and Plaza CEO Jonathan Jossel. “I believe Circa will enhance their revenues and [cash flow] as well,” he explained. “We’re all in this together. We want to bring people downtown to Fremont Street.”

Circa is the first new property to open downtown since the Sundance in 1980, that subsequently became Fitzgeralds, before it was purchased by Derek and Greg Stevens in 2011 and renamed D Las Vegas. The brothers also own the historic Golden Gate, which opened in 1906.

The resort’s 7,000 sq ft casino floor feature features 49 table games and 1,350 slot machines. It also boasts an innovative HVAC system with fresh air being pumped in from the floors, allowing it to rise and carry smoke and other impurities with it.

Stevens quips that Circa is really “a sportsbook so big we built a casino around it.” The three-story, stadium- style sportsbook boasts a 78-million-pixel highdefinition screen, viewable throughout the casino, with capacity for up to 1,000 guests. Operated by Steven’s sports betting venture Circa Sports, the sportsbook also includes a dedicated broadcast studio for the sports betting network, VsiN.

“Whether our guests are placing a bet in the book or at the greatest pool in the world, we’ve made a point to modernise the sports experience in downtown Las Vegas,” he explained. “I think we created two of the most unique spots to catch a game in Vegas.”

Circa offers a number of restaurants, including Saginaw’s Delicatessen; Victory Burger and Wings; a permanent food truck, Project BBQ; Asian fusion from 8 East; and Barry’s Downtown Prime, a steakhouse from chef Barry Dakake.

The casino resort also features two retail concepts, Circa Collections and Fuel. “When looking for a retail partner, we turned to Marshall Retail Group to help us execute our vision for great original concepts on the casino floor,” said Stevens. “We wanted to ensure that guests will have everything they need when they step inside, ranging from a swimsuit for Stadium Swim, Circa swag or late-night snacks. These stores really will have it all.”

Discussing Circa, together with the forthcoming Virgin Hotels Las Vegas and Resorts World, VitalVegas.com founder Scott Roeben emphasised that the new resort projects will help the city recover from the business impact of the COVID- 19.

“They’re especially needed now. Not just for economic reasons, including the large number of new jobs they’ll create, but also for the buzz they’ll generate around the world. Vegas has been through a lot, and projects like these will serve as the symbolic beginning of the Vegas rebound,” he affirmed.

Resorts World Las Vegas president Scott Sibella has confirmed that the property remains on track for a summer 2021 opening despite the coronavirus pandemic.

“We’re about 75 percent completed. And we’re on schedule to open next summer,” he stated. “We slowed down a little bit but never came to a stop, but now we’re back to full momentum. This week alone we have at least almost 3,500 construction workers on the site.”

While the new resort still does not have a definite opening date, Sibella was optimistic that regarding the property’s prospects when it launches next year. “We hope COVID is behind us, if COVID isn’t behind us we hope it is less restricted, but we’re opening next summer either way,” he added. “This city has proven from history that it rebounds faster than any other city, so we do know when things get better, Vegas will take off.