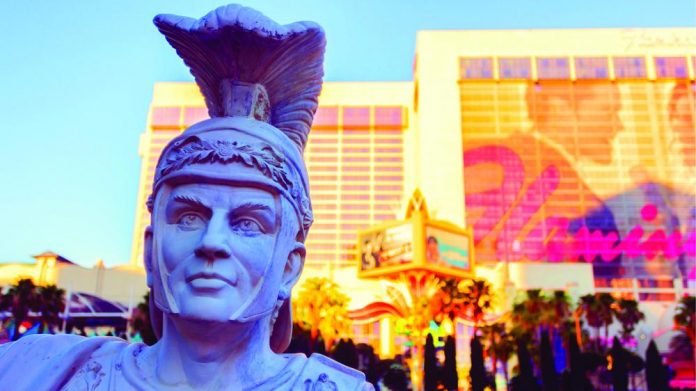 As Julius Caesar exclaimed in the British classic comedy Carry on Cleo, “Infamy, infamy, they’ve all got it in for me”, it would seem to be the case for Caesars Entertainment as the list of potential suitors looking to buy the company, or at least its lucrative Las Vegas Strip assets, continues to grow.

As Caesars’ new CEO Tony Rodio straps on his chaps and climbs in the saddle, it’s still unclear just what the future will hold for America’s largest casino chain.

Despite the fact that rumours of a sale have been percolating since last year, there was no acknowledgement of this during the company’s Q1 earnings call in May.

“The company has made substantial progress since the conclusion of the restructuring, and I look forward to identifying and working towards additional growth opportunities,” Rodio stated, as he gave a brief summary of his plans for the future, which include creating “a culture in which all of our team members think and act like entrepreneurs”.

Nevertheless, activist investor Carl Icahn has been unambiguous in his support for a sale, and given that the 83-year old now controls almost 20 percent of Caesars and a quarter of the company’s 12-person board, he’s in a good position to call the shots.

“I believe the best path forward for Caesars requires a thorough strategic process to sell or merge the company to further develop its already strong regional presence, which will allow Caesars to continue to take advantage of the Caesars Rewards program bringing more and more players into Caesars’ Vegas market,” he said in a statement.

According to the New York Post, Caesars has allowed two potential suitors into its “data room” to review its financials, Tilman Fertitta, owner of Golden Nugget Hotel and Casinos, and Eldorado Resorts, which owns the Tropicana in Atlantic City.

Eldorado has been in talks with Caesars about a possible merger for months, but is said to have held off on a bid partly because CEO Tom Reeg wants the company to find $500m in cost savings first.

Eldorado generates about one quarter of Caesars’ net revenue, but its operating expenses are 86 percent less, at $47m, according to public filings.

It’s suggested that Icahn has also argued that the company’s corporate expenses – coming in at $332m in 2018 – need to be reined in.

Caesars has reportedly given Eldorado until Memorial Day at the end of May to make a binding offer, but Reeg is keeping his cards close to his chest.

“We read the same newspapers that you read, so we read the same rumours about what we might or might not be doing. We’re not going to comment on any particular potential transaction,” he stated, speaking during Eldorado’s Q1 earnings call at the start of May.

Eldorado owns 26 properties across the US, while Caesars owns 37 US casinos and 13 overseas properties.

According to a recent report by analysts at Jefferies there would be considerable upside to a merger between Eldorado and Caesars – if slimmed down, the combined company could generate $3.3bn in earnings, the investment bank estimated.

Meanwhile, Tilman Fertitta is also trying to put together a rival bid for Caesars but is still struggling to secure the necessary funding.

An earlier merger proposal last November was rebuffed by Caesars, sending the Texas billionaire on a search for cash partners to shore up his bid. Media commentators have also speculated that Icahn may yet be willing to partner with Fertitta.

Any buyer approved by Icahn, would only have to buy 71.5 percent of the company, making the deal far more affordable.

Treasure Island owner Phil Ruffin has also thrown his hat into the ring this May and has expressed an interest in acquiring Caesars’ Las Vegas Strip properties.

“They have some great locations and we would have strong interest,” Ruffin affirmed during a recent interview. “We don’t have any debt and so we could borrow a lot of money if we found the right deal.”

The 84-year-old businessman stated he could borrow an amount equal to about six times a property’s cash flow, while he is primarily interested in Strip properties that can generate an annual cash flow of around $200m to $300m.

However, Barry Jonas, an analyst at SunTrust Robinson Humphrey, noted that Strip properties should be able to fetch valuations equivalent to at least 10 times their cash flow, and posited that Ruffin would need at least $2bn to buy a property in this range.

Yet while large operators such as Eldorado could offer a higher price than Ruffin because of the greater savings they could generate by merging a Caesars property into their company, Jonas contends that the entrepreneur – who has a net worth of about $3bn according to Forbes – shouldn’t be discounted.

“While we’ve looked at Caesars sales scenarios with individual companies like Eldorado assuming just regional asset divestitures, anything is possible in regards to individual Caesars assets in Las Vegas also changing hands. We would consider Mr. Ruffin to be a qualified buyer,” he added.

There is another potential fly in the ointment for Ruffin, who pointed out that once a property is sold by Caesars, it ceases to have access to the firm’s 55-million client database, the largest loyalty programme in the casino industry. In light of this, he suggested that potential buyers “have to be very careful” in their valuation since both property occupancy and cash flows could decline following a sale.

“[The loyalty programme] is very, very strong. It would be hard [to maintain cash flows] unless you can cut a deal with them to keep their rewards program. That would be the problem with buying a Caesars property,” he clarified.