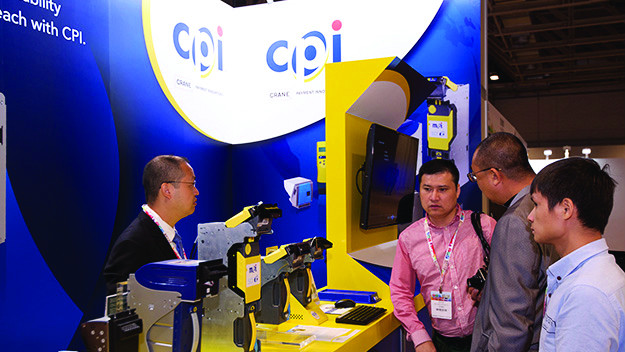 When it comes to performance and cash data, CPI are confident that the Easi Trax solution is the way to go.

[dropcap]C[/dropcap]ash-handling manufacturer Crane Payment Innovations (CPI) is no stranger to the MGS Entertainment Show, and neither is its expo highlight product Easi Trax which seems a mainstay of the Macau marketplace at the moment.

With the Parisian and Wynn Palace opening this year, and MGM Cotai opening in spring next year, CPI have had a strong 2016 in Macau with its bill validator and Easi Trax solution installed in many of the new machines on casino floors throughout the SAR.

Bill Murphy, VP sales Asia Pacific and India, commented: “It’s been a great year as most of the new casinos that have opened in Macau and in the region have specified our bill validators. This is because of the performance and support we offer and we’ve had a lot of successes with the major casinos that have opened, so our shares been very good.”

This is the added value that we give that differentiates us from our competitors, and it’s a big selling feature beyond the fundamentals.

For bill validators, Murphy explained that the fundamentals are always the same, with CPI ensuring they have the strongest product possible in terms of security, high acceptance rates, speed and reliability.

However beyond that, the company differentiates itself with features such as Easi Trax, an intelligent cash-box that adds a whole new level of security and data to the casino floor.

Murphy explained: “Easi Trax allows operators to remove a cash box from a machine, keep it locked, take it to a back count room and interrogate it on a docking station. The station then tells the operator the amount of cash in the box, the machine it was taken from, the time it was taken, and also a full analysis which puts all that information into a software package, giving the casino the ability to monitor the whole floor in terms of bill validator performance. This is the added value that we give that differentiates us from our competitors, and it’s a big selling feature beyond the fundamentals.”