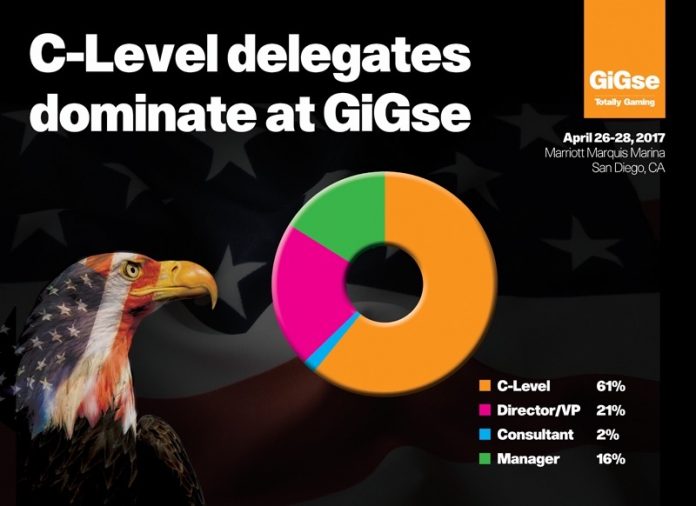 GiGse has confirmed that 61% of its audience would classify themselves as C-Level within the industry with a further 21% deemed as Directors and VPs.

GiGse is one of the most popular gaming events for C-Suite professionals, according to analysis of the attendance data from the 2016 edition. 61% of delegates at GiGse were classified as C-Level with a further 21% deemed as being either Directors or VPs. The concentration of ‘C-Suiters’ is amongst the highest found in the portfolio of Clarion’s gaming brands and similar to the specially curated Juegos Miami event which was launched last year.

Reflecting on the figures, Rory Credland, Event Director responsible for GiGse, said: “GiGse has always been pitched at decision makers operating at the highest level and the content that we curate reflects that fact. To have 82% of delegates classified as occupying positions of Director or above reflects the seriousness with which North American facing gaming organisations approach GiGse.”

He added: “As an event organiser it is essential to know your audience and many of the topics that will be debated at GiGse go to the very heart of gaming in the United States.  Key topics that will be covered in San Diego include the use of social gaming not only as a revenue generator but also as a method of converting players to the casino floor, the monetisation of skill-based gaming, virtual reality and eSports, the future scenarios of sports betting and building loyalty with next generation consumers in face of the very powerful challenges presented by multi-media entertainment brands.”

GiGse has been developed to help gaming brands balance their current and future investment, with features including Activate 2017 which deals with current challenges and opportunities and Activate 2027 which draws on outside industry input in order to help navigate a profitable path for serious gaming brands that are planning ahead.

The simplistic 2-track format enables attendees to devise their social gaming journey alongside envisioning an AI customer experience – mastering on-premise mobile whilst plotting their next eSports tournament, all set against the backdrop of forthright political and social debate conducted at the highest level.

EGT Interactive strengthens its partnership with GVC Holdings in Germany