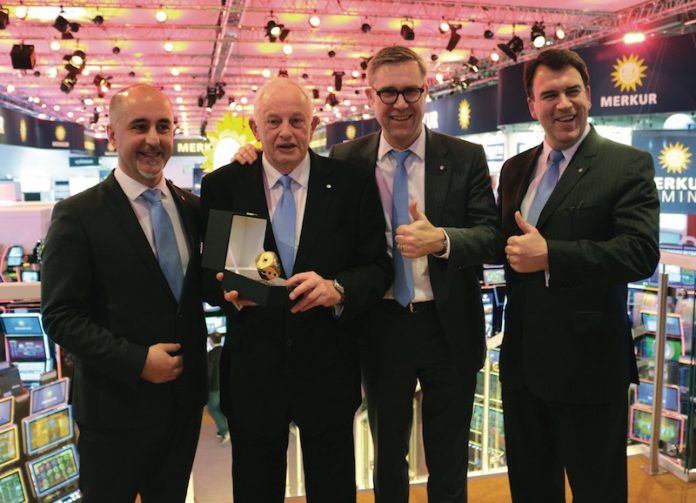 After receiving a Golden Dice Award marking his life’s work at this year’s ICE, industry veteran David Orrick, currently Director of Industry Relations at Merkur Gaming, reflects on the highlights and success of his 20 year tenure in the sector.

Who have been your major influences in the industry?

The casino industry is quite rightly described as a people business and, over the years, I have been influenced by a host of international characters who each, in their own way, added to my store of knowledge and experience.

There are, however, two people that have hugely influenced both my professional career and my private life. Angel Gallego came into my life when he became general manager of Unidesa Gaming in the late 1990s. His often flamboyant Latin temperament combined with his love of family and football to sometimes disguise his keen commercial brain and his ability to go straight to the heart of complex problems and define a usually straightforward solution.

The success that Unidesa had through the early years of the 21st century was down to Angel’s drive, his leadership, his sheer passion for the industry and his uncanny ability to successfully navigate the channels of corporate bureaucracy.

Mention the name Jens Halle anywhere in our industry and you will release overwhelmingly fond memories of a man who was a true gaming icon. The former Bally, Novomatic and Merkur Gaming executive was held in total esteem by all who met him; for his professionalism and his personal charisma.

The team that Jens built around him saw the heyday of the Novomatic empire and, under his direction, established a heady cocktail of skill, dignity and style that brought success on success, year after year.

I was both honoured and proud to have been part of that team for nine years but I confess that I had a head start on my appointment, having counted Jens as a personal and family friend for some years before he became my boss.

When I suffered a tragic personal bereavement I can say from the heart that nobody on earth had a better friend than I did in Jens during those dark days. Then, just two months later, Jens also was tragically gone. He was more than simply an influence on my life. Jens Halle was my mentor, my teacher, my supporter and, above all, my friend.

What have been your top personal achievements?

I came to the world of gaming from a successful combined career in professional motorsport and motoring journalism.

Those were both ‘team’ cultures and I was thus by nature a ‘team player’. The same is absolutely true of my working experiences in gaming, without the support of the team within which I work, I can achieve nothing. That is why I chose to dedicate the Golden Dice award presented to me at ICE to the fantastic team at Merkur Gaming.

It is so exciting to be a part of a team that knows it is on the verge of even greater success as new professionals come to join us, new markets are opened up and new products are being created. It is, for me, a great feeling and I want my fellow team members to share in the accolade that they have helped me achieve.

Could you share with us a few of your favourite products from over the years?

There have been so many, but I remember with great fondness a real ’hit’ game from Unidesa called Swampland, which, for a while, was such a great performer that production could not keep pace with demand.

That was in the days when intellectual property rights were not so easy to protect and I remember being at the EELEX show in Moscow when a local Russian manufacturer displayed an exact copy – including cabinet, artwork and, apparently, game software – of the game. Their booth on the adjacent aisle actually backed onto the official Unidesa display.

The show organisers called in the local police, the ‘imitator’ was forced to withdraw from the exhibition, and amazingly, the pseudo- Swampland was never heard from again.

Then there was the arrival of the Gaminator cabinet from Novomatic, perhaps one of the most innovative engineering exercises ever seen on gaming floors and a product that is still in use around the world today.

Most recently I have become a huge fan of Merkur Gaming’s Black Series; introduced just a few weeks ago at ICE.

Take the existing Merkurstar and Avantgarde cabinets, finish them not in chrome but in matt black with contrasting red lighting and add a multi-feature, character led game in Win City and, you have an instant attraction and soon to be a certain big hit with players.

The idea is so basic, so simple, but so different that the Black Series and the games that will follow Win City provides that intangible quality of instant attraction that only comes along once in a while.