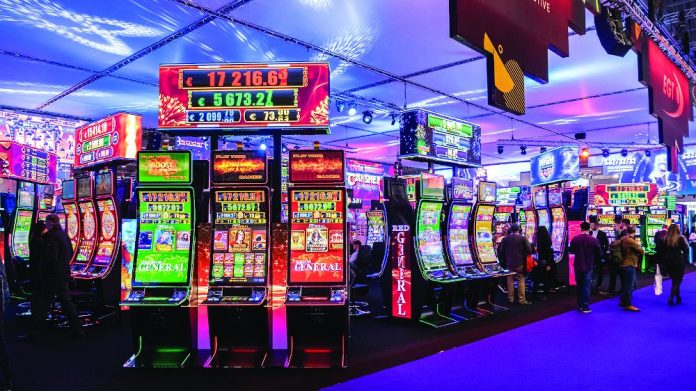 EGT presented a range of gaming innovations during ICE, with the company’s executives reporting significant interest in the new General line of cabinets, along with the firm’s multi-game mixes and single title, and the latest modules for the Spider CMS.

Taking its place among the top five biggest exhibitors at ICE with a 1200 sqm stand, Euro Games Technology offered visitors a vision of the shape of things to come at this year’s show. “We were pleased to debut seven new slot models in the General series at ICE London which will be entering mass production in the coming months,” said Stanislav Stanev, marketing and sales director.

“Immediately following the show we will release the G55 C VIP cabinet, which is already hotly anticipated in a number of markets. “The General line offers a diverse range of display curves, together with a wide variety of HD multi-game content.

The General multi-game mixes offer numerous slot titles, while our Power multi-games feature a range of multiplayer games such as roulette, blackjack, baccarat and keno. “We also showcased several single games as well, including Princess Cash and Dragon’s Realm with the High Cash jackpot and Fiery Horn and Amazons’ Battle Grand connected to 2 Happy Hits.”

Meanwhile, the company’s subsidiary EGT Interactive presented two Egyptian-themed jackpots at this year’s show. Egypt Quest was released at the end of 2019, while the five-level mystery bonus Scarab Jackpot was shown for the first time at ICE London 2020. “This year’s ICE presentation has been one of our all-time best,” said Biserka Draganova, EGT’s sales manager for the Balkans.

“Visitors from my region were particularly interested in the G 55 C VIP cabinet and the slant top models, G 27-27 St and G 27-32 St. “My customers from North Cyprus also wanted to know more about the G 32-32 VIP model and showed a strong interest in EGT Multiplayer’s products, specifically the new R-Line terminals, mainly because of their adjustable display.

“Alongside this, the Red General HD multi-game mix, featuring 50 games and five of which have a four-level non-progressive jackpot, also attracted a lot of attention.” Following a year of tremendous growth, EGT Romania’s team welcomed numerous visitors from the country at ICE.

“We are also looking forward to the Purple Power multigame mix which is sure to be a hit in the country thanks to its high-quality slot titles and roulette game.” Gergana Chelebieva, regional manager for Ireland, Portugal, Malta and Italy, noted that several Irish customers who already have the Super Premier cabinet installed in their properties were interested in upgrading their VIP offering with the Super Premier 75.

The S32 and S32-32 multiplayer terminals also created a buzz with operators from the Emerald Isle thanks to their compact dimensions and ability to connect to several roulette wheels.

“Visitors from Portugal were particularly interested in our jackpot solutions and single games, particularly the Asianthemed Dragon’s Turn and the Princess Cash and Dragons’ Realm,” added Chelebieva.

Nadia Popova, director of EGT Central America, the Caribbean and Mexico, reported that “ICE London is turning into an increasingly important event for Latin America”

“We had a record breaking number of visitors from the region this year,” she stated.

“Our guests were impressed by the General cabinets, they liked their concept of having one large HD display with different curves. “The new single titles with the 2 Happy Hits and High Cash jackpots also have a lot of potential for our markets and will allow us to further diversify from our established base in the multigames segment where we’ve already secured a significant market share,” she added.

Popova also noted that the “EGT Lounge” initiative, which sees casinos create a dedicated area for the company’s machines continues to gain traction with LatAm operators, while the company’s overall growth in the region is constantly accelerating, with future installations already lined-up for Mexico, Panama, Chile and the Caribbean.

Silviya Marinova, director of EGT Colombia, enjoyed meeting with current and potential customers at ICE, inking several deals as soon as the show opened. She explained that a number of Colombian operators have already installed EGT Multiplayer’s Stork terminals, while she also met with many of the country’s licenced online operators during the show.

“We have accumulated enough land-based experience to know which games we should bring over for our iGaming customers, so we’re constantly widening our interactive portfolio,” she said.

With the system recently having received its GLI 12, 13 and 18 certifications, the Spider CMS team received visitors from a number of countries, including Ireland, Romania, Serbia and Bulgaria during ICE. “Our guests at ICE tested the new Bonusing and Player Tracking modules that contribute to more effective casino business processes and soon will also be approved by GLI,” explained Petar Spasov, head of the CMS division at EGT.

“The Spider CMS is constantly being enhanced with new functionalities.” Spasov stated that following ICE, his team is now working on new Shop/Bar and Raffle modules, giving players the option to order drinks from the bar or buy different goods using their collected bonus points, and allowing allowing operators to organise a variety of raffles.