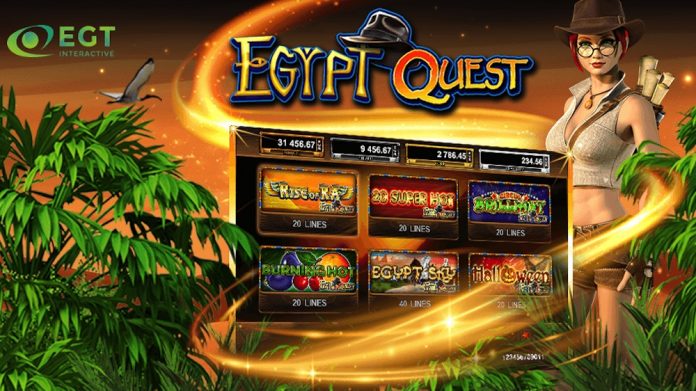 With the online launch of one of the most successful games in Euro Games Technology’s land-based portfolio, Egypt Quest, the company’s interactive branch embarks on a strategic expansion into core new territories in the North, South, East and West of Europe.

EGT Interactive has confirmed the release of one of the EGT Group’s leading games, Egypt Quest, to its range of online video slots in a new approach to both playability of the company’s most successful titles and their ongoing growth into new markets. Commenting on why the bonus game has been chosen to spark this initiative, Irina Rusimova, Business Development Manager at EGT Interactive, said: “Egypt Quest has been one of the most successful games in the land-based operations, which makes it known to our fan base. We believe that it will have overall high success ratio with all our operators and we already have the necessary data backing up this statement, as during the first month of its release, it has already aligned in the top 20 of EGT’s best performing titles.”

The company has recently expanded into Sweden, Hungary, Spain, Bosnia and Herzegovina following core data from both its land-based and digital brands. Rusimova believes the key to ongoing expansion is understanding specific requirements in terms of translation and localisation of games and their interfaces in tandem with meticulous selection of partners when entering a new territory. “Strategic expansion is part of our policy for growth and development,” she explained. “We are constantly looking for new opportunities and following the current trends of the regulative framework in the newly opened markets, we are streaming to certify our products according to the lawful requirements in every new territory. This of course takes out some of our current partnerships to a more global level, leads to further expanding of our operator network and gives access to a great content to more and more players.” In terms of the opportunities inherent in translating Egypt Quest’s success to multiple new markets, EGT Interactive honed in on a new approach to six of its most successful titles, mainly in providing players with higher retention rate and the possibility of numerous winnings. Commenting on what made them land on these specific titles, Rusimova said: “We wanted to present to our customers a brand – new product in terms of concept, visuals, bonus system and overall experience. At the same time, it still references to some of the top titles from the portfolio but gives the player a chance for double winnings and many special features such as free spins and bonuses. Rise of Ra, Burning Hot, 20 Super Hot, Halloween, Circus Brilliant and Egypt Sky are already familiar to the audience, but are now placed in a separate portal with a new bonus game comprising of 4 Mystery Jackpot Levels.”

EGT Interactive’s games are currently available in English, German, Italian, French, Spanish, Hungarian and Romanian in order to correspond directly to the players but as the company prepares to move into new territories like Denmark, the focus is on using data to increase the brand’s footprint in these new territories. “Part of these markets, such as Hungary and Spain, are natural continuation of our land-based operations in place,” explained Rusimova. “This gives us high certainty that the portfolio will be highly successful among the players, as it has already been in the market. The possibility to offer the same games to both – the offline and online operations, is one of our greatest competitive advantages which, for sure, influences the decision when prioritising the entrance of the new markets. Nevertheless, we believe that the EGT portfolio, along with its traditional and classical touch, appeal to wider selection of players, thus making it successful choice for operators in most of Europe.

Currently Egypt Quest is available through the brand’s operator network to the players in Bulgaria, Armenia and Georgia, and is currently aiming for certification in Romania, Croatia, Estonia, Latvia, Portugal. “Our aim is to be able to provide this great new game to all territories where EGT portfolio is available, she concluded. “We are already seeing great results from Bosnia and Herzegovina and our expectations are for successful launch in Northern Europe – Sweden and Denmark, as well.”