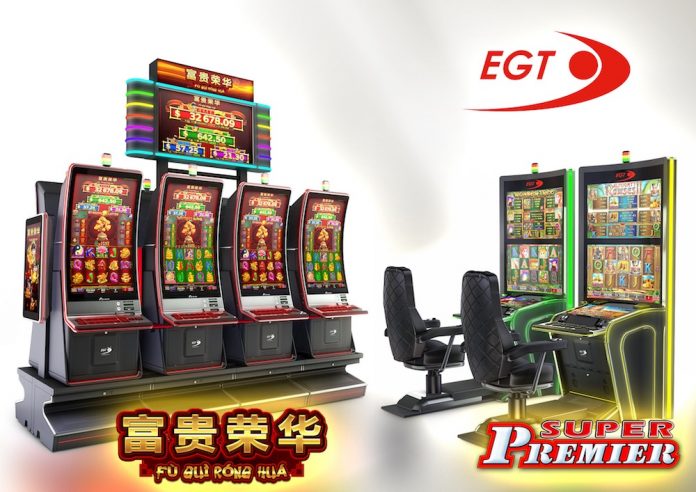 The two latest slot products from Euro Games Technology are gaining ground in France, speeding up the plans of the company to develop further on the local market.

Euro Games Technology (EGT), of one the fastest growing companies in the global gaming industry, has confirmed its two newest products are proving to be key hits in France.

EGT claims that over 30 cabinets featuring the strikingly elegant Super Premier slot model, featuring Red, Green, Orange and Fruits Collection multigames, have already been incredibly successful with players in 13 casinos around the country.

Additionally, the Chinese-themed four-level progressive jackpot system, Fu Gui Rong Hua, has been making waves with the visitors of two of the most respectful gaming establishments in France – Casino Barrière de Blotzheim, owned by Groupe Lucien Barrière, and Casino Villers-sur-Mer, a property of Groupe Tranchant. The product is soon to be expected in Arzon Casino of the JOA group and other establishments as well.

EGT believes the success of the Super Premier is down to its comfort and depth-enhanced gaming experience featuring a 42-inch curved screen, modern design concept and an integrated multimedia chair. Converseley, the company claims Fu Gui Rong Hua has been a hit with players thanks to its cheerful animations, the Eternal Lotus and Empress Gold games and the thrill of the rivalry for the jackpot.

“All these features, backed up with our highly competitive quality-price ratio, made our offer difficult to be turned down by the local operators,” explained Borislav Prokopiev, EGT’s sales manager for France, Monaco and Belgium. “We have had so far numerous highly successful installations in France that have established the image of EGT as one of the most innovative and appreciated manufacturers in the local gaming industry. Adding to this overall opinion was also our recent delivery of the newest products of the company, including Super Premier and Fu Gui Rong Hua, at Sun Casino, Monaco, that made a splash in the players circles.”

EGT has been rolling out its products in France for several years and claims its results have paved the way for further partnerships, strenghthening their position across a variety of regions.

Soon after its first installation Super Premier became one of the top 5 performing cabinets in the country and a number of new contracts for the model have been inked to be executed within the next month following this. Similarily, Fu Gui Rong Hua begins its local journey with 12 delivered cabinets and interest in the jackpot system is constantly growing.

According to Mr. Prokopiev the year so far is shaping to be even more successful than 2016, during which the company reached 100% local sales growth, with the next 6 months set to be busy for EGT not only in France, but also in Belgium.