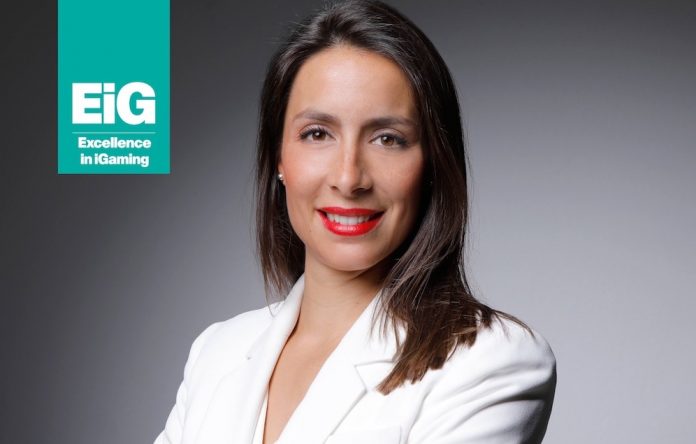 As an emerging technologies lawyer and university lecturer specialising in the gaming sector, Patricia Lalanda Ordóñez, will be at EiG helping to explain the phenomenon that’s Blockchain. Ahead of her appearance in Berlin, the Partner in LOYRA ABOGADOS, previews some of the key issues that she will be discussing with delegates.

What hurdles need to be overcome to progress Blockchain?

Firstly, we know that Blockchain has the potential to improve systems operations either by reducing costs or increasing speed, and that it has superior security features; however this technology itself, the original Bitcoin Blockchain, is not owned by anyone (individual, government or corporation), rather it is owned by the Bitcoin community itself as the software is open source.

Like most of the things in this world, those entities that don’t have an owner receive much less attention than those that do – for example, farm animals will never go extinct as they have owners as opposed to sections of the wild animal population that are being wiped out. Consequently, it has taken a long time for this technology to be known by ‘outsiders.’

Once known about, it is an even greater challenge to have people understand it. However, this isn’t overly concerning if you think the Internet wasn’t embraced by the mass population and commercial users until the World Wide Web and web browsers came into the picture in the late 1980s/early 1990s.

We are humans, and the concept of ‘change’ and new often scares us. For this reason, people and companies are reticent to invest time and money in a new and disruptive technology which, furthermore, was first known to the public through Bitcoin and its early–days bad reputation. Neither Bitcoin nor Blockchain technology per se have had an ‘owner’ to fight for its success.

There are other mental barriers to be overcome, such as the fact that we are used to having our lives led by centralized systems controlled by some authority. Our mind frame is reticent to allow decentralized systems such as Blockchain to take action. BitTorrent helped a little bit on that one.

Determining how the Blockchain fits in with existing regulation and legislation can be very cumbersome. Development of effective regulatory responses to the development of Blockchain is still at an early and delicate stage. Gaming authorities are looking at it, even EU Institutions. It is true that regulators in some areas have made considerable progress in developing effective responses, however a great deal of work remains to be done to put in place effective frameworks to regulate Blockchain and virtual currencies in a manner that guards against the risks while not stifling innovation and evolution.

On this same note, in many cases technical specifications must be revised when introducing new technologies into the gaming systems, both for online and land based gaming elements. Some new technologies even go through a whole new set of legislation for example, server based slots. However, a common answer for all jurisdictions cannot be given as each has its own requisites to abide by. In any case, it is complicated to predict when operators and regulators will be on the same wavelength.

There can be many other hurdles to be overcome but I believe the advantages make it worthwhile to take Blockchain and cryptocurrencies into consideration.

How important is trust?

I strongly believe trust is a core value and it requires a great deal of honesty, authenticity and integrity both in human and commercial relations. However, trust is at its lowest, which isn’t necessary a bad thing, it just means that people are more informed and are starting to make decisions. Accordingly, it’s the perfect timing for technologies that reinforce mechanisms of trust human to human and human to machines (i.e. wearables).

If a human being can be offered full transparency on transactions, he/she will be more willing to participate. For example, proving to players that there is no way the operator could have manipulated the results of a wager is a big task. In many jurisdictions, there have been control mechanisms required to grant an operator a license and Blockchain technology can be another solution for this. A great example of this is how some “provable fairness” solutions are being created for online casinos.

If the question is can we trust Blockchain, the answer is yes. Having understood how the technology works I don’t doubt it is trustworthy as much as mathematics can be trusted in general to give solutions to our daily life. However, I wouldn’t have blind faith in any application which has been developed based on Blockchain.

Who is/are the main commercial benificaries of Blockchain?

As this technology and its applications are still very nascent there are as yet no numbers or information leading us to conclude that a specific group of gaming industry stakeholders are the main beneficiaries. However, I think all of us can profit sooner or later if we wish to upgrade the technology that we are using today.

You may be a multi-market, land-based and/or online operator and you’d like to have your own token to make seamless, fast and cost-efficient deposits and withdrawals avoiding, while we are at it, data redundancies and the replacement of legacy systems. This can be run on a (private) blockchain, for example.

A small technological startup can be working on Blockchain-based cryptographical secured cards to play poker.

There are many examples that could be brought up, that’s part of the beauty of the Blockchain – there are countless possibilities.

Commercially, those who come up with solutions to overcome the trust gap will be in the lead position.

Is there an idiot’s guide to Blockchain?

I recommend two of the first books I read on the topic that helped me understand, even philosophically, what all this was about. They are: ‘Wild Cat Currency’ by Edward Castronova (2014) and ‘Crypto Currency’ by Paul Vigna and Michael J.Casey. (2015). In addition, a more updated helpful book is ‘Blockchain: Down The Rabbit Hole: (Discover The Power Of The Blockchain)’ by Tim Lea.

EiG, one of the most anticipated b2b events on the gaming industry calendar, is being held at The Arena Berlin, 30 October – 1 November. The theme for 2017, Generation Hybrid, will focus on key challenges and opportunities facing the I-Gaming industry, including Artificial Intelligence, Blockchain and how to engage with Generation Z.

For more information and to register: visit: eigexpo.com