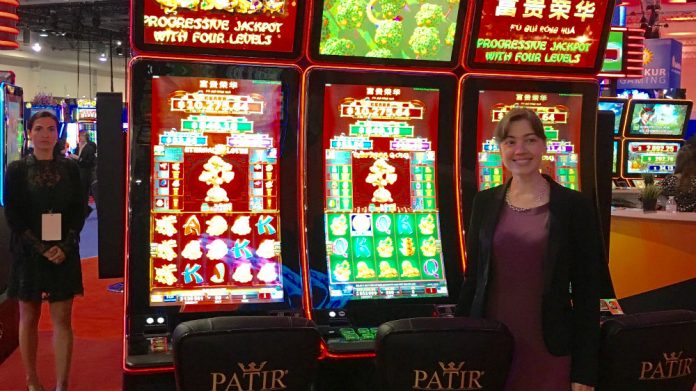 Euro Games Technology  used G2E as a means to build upon impressive gains both in the US and throughout the Spanish-speaking world.

[dropcap]B[/dropcap]ulgaria’s Euro Games Technology (EGT) returned to G2E this year on the back of increasing floor presence in Florida, where its exclusive US distributor Reel Games is based.

“Reel Games has been extremely successful with our machines in Florida – mainly with our Premiere cabinet, but also with our jackpot systems,” EGT marketing manager Radostina Ganeva told Casino Review. “I’m pleased to say that almost every casino in Florida now carries our machines – and there are plans in place to expand into neighbouring states very soon.”

The pace of this expansion in America has been impressive: EGT only released its Premiere cabinet (its very first curved-screen machine) in February of this year. The Premiere comes in two variants, with the Super Premiere model affording players boosted comfort, without sacrificing the video aesthetics of the core product.

G2E 2016 marked the US debut of EGT’s Spider management solution – which has proved so popular in Europe that the company has seen fit to create an entire separate division around it. Meanwhile, rapid uptake of the company’s interactive content has led EGT to establish an entirely separate spin–off company in the form of EGT Interactive.

“The decision to create a separate company really does reflect the pace of expansion our interactive sales enjoyed,” Ganeva related. “This G2E marks the second major show EGT Interactive has attended – after a great debut at the iGaming Show in Berlin earlier this year.”

But whilst growth in the US remains a long-term objective for the Bulgarian manufacturer, Ganeva admitted that the key rationale behind the company’s exhibition at G2E lay in furthering its sales-penetration in both Central and South America.

“We’ve found that operators throughout the Latin American world are more receptive to newer brands like EGT than their US counterparts,” she commented. “To that end, we’re principally here to market to these international visitors.”

Looking ahead, we’ve just entered Mexico with our first installation, and are confident of an increased foothold there. We’re also keeping a very close eye on the prospect of casino legislation in Brazil.

Indeed, such has been the reception to EGT throughout the LATAM region, that the company now maintains a landed office presence in Panama, Colombia and Peru.

“Once again, those are company developments indicative of strong sales performance in all three countries,” Ganeva explained. “Looking ahead, we’ve just entered Mexico with our first installation, and are confident of an increased foothold there. We’re also keeping a very close eye on the prospect of casino legislation in Brazil.”

With this in mind, it follows that EGT will be heading to the SAGSE show in Buenos Aires later this month.

As for her verdict on the results of G2E itself – Ganeva was exuberant.

“I’d say this has been our most successful attendance at this show to date,” she said. “We relocated our stand to a very central location of the expo floor, and that’s resulted in a substantial increase in visitor footfall.”