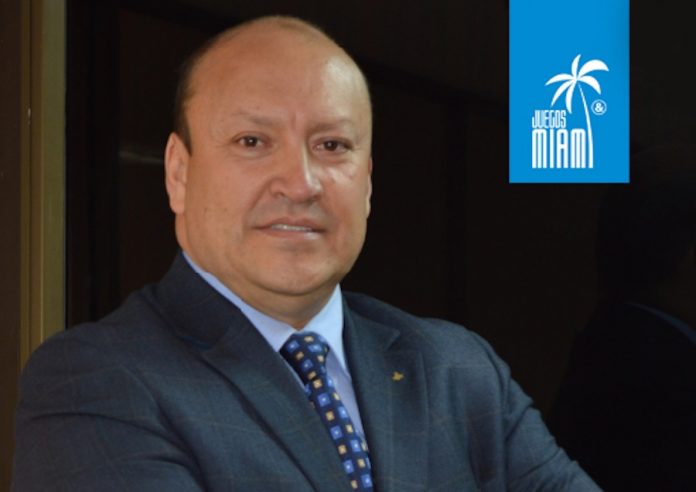 Evert Montero, President of Colombian trade body, Fecoljuegos, has been confirmed as non-executive Chairman of Juegos Miami, the bespoke business event which was created by Clarion Gaming to meet the specific demands of the Pan-Latin American and Caribbean markets.

Acknowledging the accolade, he said: “I am not accepting this honour as Evert Montero. Rather I accept it as the President of Fecoljuegos and of course as a representative of the gaming industry. I see this honour as a huge responsibility, specifically to show that in Latin America and Colombia there is still a lot of work to do in order to develop. I also take it as recognition from Clarion Gaming, which is the most important international benchmark when it comes to gaming events.”

Mr Montero believes the progress made by Juegos Miami following its launch in 2016, demonstrates the importance of bringing the industry together as well as Clarion Gaming’s position as a leader and pioneer of large-scale projects. He said: “Juegos Miami has huge potential, and I feel that it is consolidating itself as one of the most important gaming spaces in Latin America, the American continent and in fact the world. It is not just attended by those of us who live in the Americas, but also by representatives from other continents. They know that there are business opportunities here and a market that has a great future ahead of it. Juegos Miami gives us the opportunity to come together and join forces to improve, learn about the latest technology and strategies, as well as the latest technical, regulatory, legal and marketing updates.”

Looking ahead to the challenges and opportunities facing Juegos Miami, he stated: “Online gaming will soon be legal in a lot of countries, and this will generate a lot of movement and change within the industry. We will also have to focus on the topic of gaming’s reputation and, of course, we must continue to analyse gaming’s future not just with regards to technology, but also in terms of new games, eSports and all the opportunities that information and communication technology brings with it.

“Latin American regulators understand that they have to create an attractive market as this is the best way of combatting black or grey market operations, which I believe is the biggest challenge. I know that Colombia and many other countries in the region are working hard to overcome it. Another challenge is that these new regulations are the first to be put in place and as such, every day we are having to learn more about the reality of the market, the operator and the player to ensure regulation is sustainable and does not just generate short-term revenue. Lastly, there is the question of the industry’s visibility in each country, and highlighting that it generates a lot of wealth, not just economically but socially through generation of jobs and the responsibility it has in each country’s society.”

Kate Chambers, Managing Director of Clarion Gaming and one of the architects of Juegos Miami, said: “The Latin American and Caribbean gaming markets are developing at a rapid pace and dynamic markets such as these demand dynamic business events and visionary leadership. It has always been our objective to place Juegos Miami at the very heart of the industry and help it to navigate a progressive and sustainable future. Evert Montero shares our philosophy and vision and has a glittering track record leading Fecoljuegos. His input to the development of Juegos Miami has already been hugely positive and I look forward to working with him in order continue the fantastic progress that has already been made and to take this very special business event to the next level.”

Jugos Miami features a powerful, strategic and hands-on learning programme presented alongside a line-up of inspirational exhibitors and sponsors. Attendance is limited to senior decision makers from operating companies as well as government and regulators from the Latin American and Caribbean region. To register interest in attending the 2018 edition, which is being held across 30 May – 1 June at The Biltmore, Miami, visit: www.juegosmiami.com

This article was originally published on www.igamingtimes.com