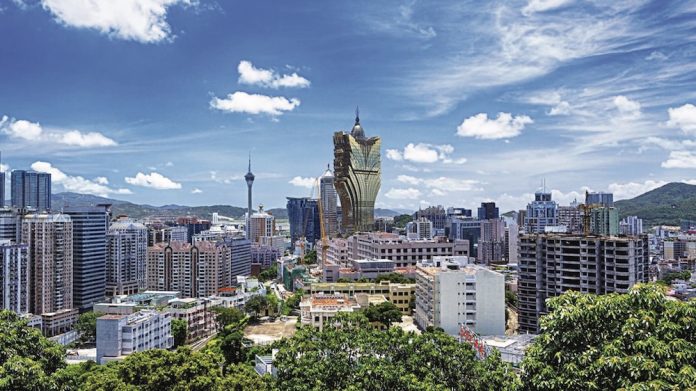 This month we have ventured into the eye of the storm to bring you hard hitting reports on toilet cubicles, hotel towers and the indomitable Macau spirit.

Kicking things off in Las Vegas, naturally we find news coming from KTNV that a bathroom break ended up with a Utah couple getting turfed out of the Venetian casino.

Fear not, for this is not a story of a couple copulating in cubicles, nor that of illicit ingestions, it is reported that it is in fact a case of time multiplied by disobedience that led to the unceremonious exit.

The Cardenas’ were at the hotel for their honeymoon when the happy groom sauntered off for a loo break during check in. His better half was at this point asked to provide ID for her and her husband, who was naturally a tad busy. Security then barged into the restroom and demanded to see some ID of the man who most likely didn’t have it readily available.

What followed was a chronic case of social media justice providing unexpected results for the now – Mrs Cardenas whipped out her phone and started the filming the security personnel who responded in less than positive terms who escorted the couple out.

It all ended up as a bit of palaver and no one left particularly enamoured with the whole affair, but hey ho, that’s Vegas, baby.

Speaking of unwelcome outcomes we have news coming hard and fast out of the Sydney Morning Herald that some locals are less than pleased with designs for a new tower at a casino.

Plans have been unveiled that would see the Star Casino in Sydney have AUS500m ploughed into a 237 metre tall residential expansion, which for the business savvy is a measly AUS2.1m per vertical metre, what a bargain.

“The location and the community have been considered throughout the process,” positively beamed a spokesman. “This development will also provide significant economic benefits for Pyrmont, Sydney and NSW.”

All is not well in the land down under however for some with one Alex Greenwich, the independent member for Sydney reckons the tower is “inappropriate and destructive”.

He wasn’t finished at that either, as he further threw about phrases such as “aesthetic disgrace” and remarked that the opening of a massive residential and leisure property would have “serious impacts” on nearby communities.

Anyway, this journey of discovery does indeed have a happy ending for Bloomberg has news that all the casinos in Macau have reopened following a big old storm.

Typhoon Mangkhut was the blustery bad guy in this tale of triumph over adversity but has been bested by that famous Macau resolve.

The slots are back spinning and operators back grinning as the state-ordered shutdown has been lifted and everyone can get back to having wholesome, responsible fun throughout the enclaves numerous wonderful properties. God bless us, every one.