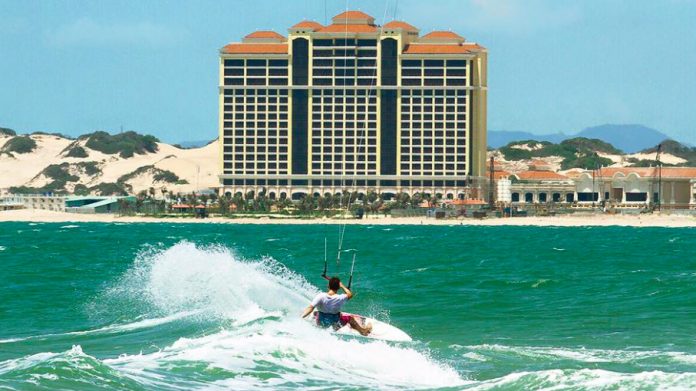 In a bid to streamline its flow of visitors, an attempt by the Ho Tram Project Company to build an airport nearby has been given the green-light from local government.

[dropcap]A[/dropcap]ccording to a report in online Vietnamese news outlet VietNamNet Bridge, local authorities in Ba Ria-Vung Tau province have given the go-ahead to plans by the Ho Tram Project Company to construct a dedicated airport for its Grand Ho Tram Strip casino resort.

Opened in 2013, the Ho Tram Strip is Vietnam’s first (and to-date, only) commercial gaming venture of international standard – but its nearest airport is over a two-hour drive away, outside the commercial capital Ho Chi Minh City.

But according to the local province’s official website, regional authorities have okayed zoning for an air hub covering approximately 200 hectares close to the tourist destination, which would cater to internal flights both to and from Tan Son Nhat International Airport.

Financials provided by HTPC said that the new transport link would take 50 years before it turned a profit.

Vietnam’s eight casino licensees are entirely dependent on international visitation – as the country maintains a policy of forbidding its citizens (with the exception of those holding foreign passports) from entry into gaming establishments.

Whilst discussions have apparently taken place within the upper echelons of Vietnam’s politburo regarding a temporary lift of the ban – reports emerged in local media this week that the latest memorandum from the country’s finance ministry would maintain its long-held stance opposing gaming for the general populace.

Meanwhile, foreign investors in any commercial gaming venture within the country are obliged to spend upwards of $4bn (E3.6bn) in order to retain operational licensure.

In the case of the Ho Tram Strip  – which is majority owned by US billionaire Philip Falcone – that level of investment exists on paper alone: the actual value of its existing assets was estimated by Forbes Magazine last December at just over $1bn (E890m), with future phases set to hit the requisite investment requirement by adding facilities almost exclusively centred around non-gaming activity. The latest addition to the luxury beachside resort will see the opening of a second hotel tower in the first quarter of 2017: which will bring its total count of hotel rooms to 1,100 hotel rooms, alongside a casino floor touting 500 slot machines and 90 tables.

As for the fate of its proposed airport project – that still has two remaining hurdles to clear. In accordance with air-traffic control policies, the casino operator still requires an official go-ahead from the Vietnamese department of defence, as well as an additional sign-off from the country’s transport minister.