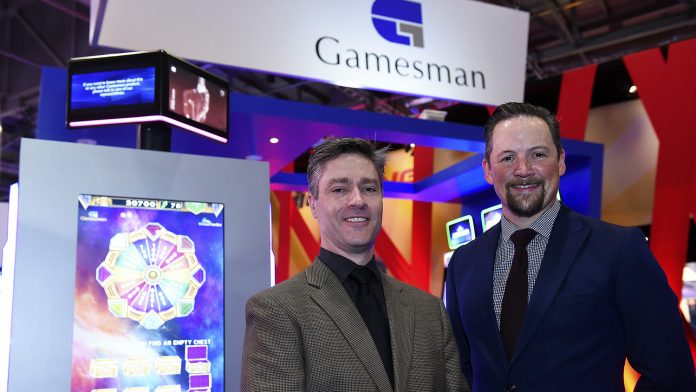 Ahead of this year’s G2E in Las Vegas, Gamesman sales director, Martin Rigby, reflects on the rise of a company 20 years’ young and shines a light on what it is that continues to keep it on top of its game.

[dropcap]I[/dropcap]nternational Casino Review: Gamesman celebrates a significant birthday at G2E. What are your reflections on the company’s first 20 years in business?

Martin Rigby: I wasn’t one of the founding fathers of Gamesman – I joined in 1998 – but I have been fortunate to experience much of the journey which has seen it grow from a turnover of zero to one of $55m (E50m). In the early days, the focus was very much on the UK AWP market, which then accounted for 90 per cent of Gamesman’s sales revenue. Whilst our home market is still very important, the company is now a global force in gaming, looking after customers throughout the world. We now have a wholly-owned factory in the Shenzen region of China and an office in Las Vegas.

Despite the changes, which are part of the transition from startup to established company, I believe our outlook and philosophy has remained true to the original vision. There remains a deep level of design understanding, we immerse ourselves in our clients’ needs and our design teams and engineers work tirelessly to develop bespoke solutions.

Above all, we are committed to delivering exceptional levels of customer service based on open and honest customer relationships.

ICR: What would you say has been Esterline’s influence since the purchase of Gamesman three years ago?

MR: The contribution made by our parent company cannot be underestimated. In order to remain in pole position and stay ahead of the market, our strategy is to leverage the assets of our Esterline Partners, notably the touchscreen division. Esterline’s influence has helped make us more efficient across the board, and there’s no doubt that we go to G2E 2016 as a strong business and with strong financial backing of our parent company.

ICR: This will be the first G2E Gamesman has attended since Mark Smith stood down as managing director. How will that feel?

MR: Although we did May’s G2E Asia without Mark, of course Las Vegas will be an unusual experience. Mark co-founded Gamesman, taking it from a standing start to where it is today – a $55m turnover international business with offices in London, Vegas and in China.

One of the strengths of his legacy is the team and structure he left. He has been succeeded by Brett Armitage, vice president of finance of Esterline’s Interface Technologies Platform. Under Brett, Arturo Catano has taken on a new, expanded role with responsibility for global sales. Nick Walter heads the Gamesman office in Las Vegas, and we have appointed Michelle Sink to the newly-created post of US account manager. We have also promoted Sergio Catano to the new position of international sales engineer, liaising between customers’ R&D and design teams and Gamesman’s own development people. It is a very strong team and one which has the skills and dedication to build on the Gamesman success story.

ICR: From a Gamesman perspective, what would you say are the dominant trends in the sector?

MR: I would highlight the affordability of new technology as being the most significant macro issue of the moment. There’s little point in us – or anyone else, for that matter – spending resource on developing something which no one can afford. After all, technology is not an indulgence. Looking at specifics, I would highlight the use of LEDs combined with new and innovative technology – especially in the high-end US machines, which dazzle the senses and make the machines really stand out.

In terms of video and touchscreen on the one side and reel mechs and push buttons on the other, I don’t see the debate as being binary. From our experience as a leading player on the supply side, the combination of both video and reels is a popular and a winning combination. This is certainly the case in the US, where it has brought the digital and mechanical interpretations together.

ICR: Where do you see Gamesman’s key product strengths?

MR: We continue to develop intelligent reel solutions employing more and more complex LED technology, as well as intelligent lighting for the machines. Our dynamic push button decks are marketed both as bespoke customer projects and standalone Gamesman products. Furthermore, we remain highly innovative in what you might describe as our ‘bread and butter’ mechanical push button ranges, bringing new features, shapes and designs to market.

ICR: At last year’s G2E, Gamesman staged a poker night as part of its Target 25K charity fundraising campaign. How did that go and how much money did you raise in the end?

MR: Target 25K was established to help raise funds for two cancer charities and followed the sad news that James Cove, Gamesman’s technical director, had contracted Mesothelioma, aged just 43. Our original aim was to raise £25,000 but the response was so fantastic that we kept on going. Friends, colleagues and customers in the industry kept on supporting us and the total grew to more than twice our target sum. The charity poker tournament we held at Green Valley Ranch was typical of the fantastic support that we received. The sum has been shared between the two charities chosen by James: the Royal Marsden and Mesothelioma UK, which has used its share to help pay the salary of one of its nursing teams. The support we received from all sectors of gaming, not least the industry in the US, was humbling.