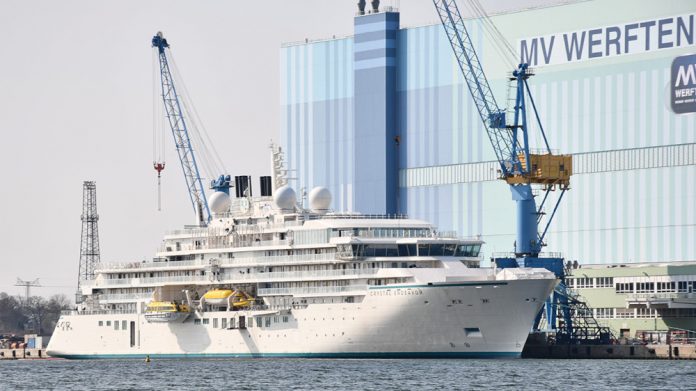 The company is planning to partner with global hotel brands for the Universal-class cruise ships, which it will build and manage under its Crystal Cruises subsidiary.

Genting Hong Kong has announced plans to build and manage a new line of cruise ships in partnership with international hotel brands.

The company’s president and CEO Colin Au said the new Universal-class ships will be “designed like airplanes, where function is more important than form, simplifying the design and production process and reducing costs, while allowing for customisation by hotel and other brands.”

The plan is that major hotel brands such as Marriott, Accor, Hyatt and Hilton will purchase the ships, which will be managed by Genting’s subsidiary Crystal Cruises. Construction is planned to begin in 2023 with the first ship to be completed in 2025.

“We will be operating these ships by using Crystal Cruises as the management [company] in order to achieve economies of scale in ship and shore operations,” Au continued, speaking at a naming ceremony for the recently completed Crystal Endeavour at the company’s MV Werften shipyards in Germany on 26 June.

Media reports suggest the new vessels will carry 2,000 passengers and will utilise a range of COVID-safe features. These will include 20 percent more space due to fewer passengers, cabins that can be transformed into sitting or dining rooms, deeper balconies so passengers can relax in private and a no-touch design with voice and facial recognition.

The completion of Crystal Endeavour marks a milestone for Genting Hong Kong, which last year said that it was suspending all payments to financial creditors in order to preserve liquidity amid the business impact of the coronavirus pandemic.

MV Werften has since been granted almost EUR2bn in financial assistance by the German government including a EUR300m grant from the Economic Stabilisation Fund and a EUR1.6bn loan for completion of another ship, Global Dream, due to be finished in 2022.

“This was done because we are convinced the shipyard has a future and because the maritime business in the north of Germany is so important, not only for the region but for Germany as a whole,” said federal minister for economic affairs and energy Peter Altmaier.

Meanwhile, Genting Hong Kong also announced that is had restructured $2.6bn in debt and secured $700m in new money. This builds on the liquidity boost from new share subscriptions in Dream Cruises by investment group Darting and Ocean World, a Genting HK subsidiary. Darting paid $59m cash for its shares, while Ocean World offset nearly $248m in intercompany loans.