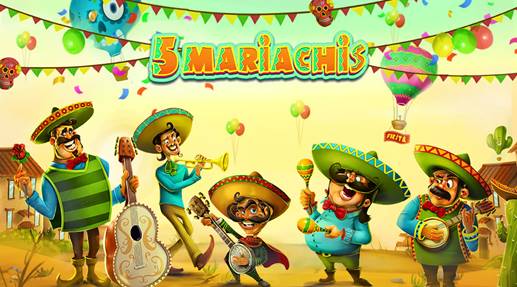 Premium slots and table games provider Habanero is inviting players to a festive fiesta in its upcoming release, 5 Mariachis.

The vibrant 5×3 slot is sure to spice things up with a fast-paced party atmosphere featuring well-known Mexican symbols, such as chili peppers, cacti, and the mariachi band’s very own guitarróns.

Players will be treated to regular, consistent payouts, enhanced by the seductive senoritas, who transform into kisses and then multiple-winning symbols during free spins rounds.

The traditional party piñata will also be ready to drop random amounts of cash on the fortunate when they hit three of these symbols on the reels.

5 Mariachis features the bold graphics and rapid gameplay which players have come to expect from Habanero’s slots, as well as a whacky fiesta soundtrack.

Toni Karapetrov, head of corporate communications at Habanero, said: “5 Mariachis is sure to heat our players up over the winter months, with a quirky design that is built to bring the Mexican fiesta to whichever device players choose to play it on.

“It’s a slot purist’s dream with its great maths and feature rounds, and a fitting way to sign-off the increasingly diverse portfolio that our studio has presided over during 2017.

The supplier now offers over 80 video slots titles, 10 table games, and 10 video poker titles, which are integrated with over 60 operators and aggregators and available in 24 European and Asian languages.