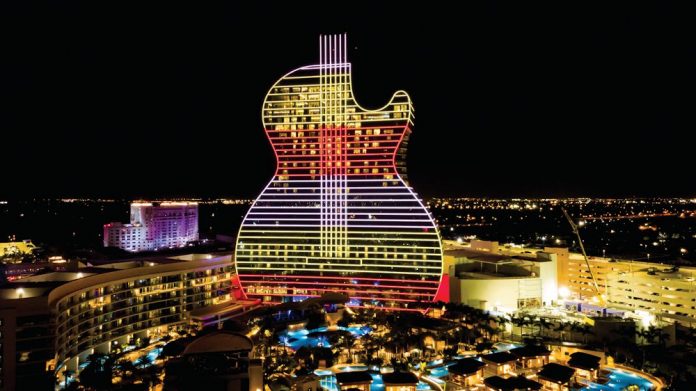 Hollywood stars Johnny Depp, Morgan Freeman and Jeremy Piven made the long journey to Florida’s own Hollywood, just south of Fort Lauderdale, to witness the opening of the Seminole Hard Rock Hotel and Casino’s new guitar-shaped tower, which has doubled the existing resorts gaming space while adding new restaurants and facilities.

The Seminole Hard Rock Hotel & Casino in Hollywood, Florida, has officially opened its new 36-story guitar-shaped hotel tower and doubled gaming space, hosting a red-carpet even with several celebrities to celebrate the launch.

However, the renovations are not just a way to expand gaming, with Seminole Gaming CEO James Allen following the Vegas model of providing a well-rounded entertainment offer, including nineteen different restaurants, 150,000 square feet of convention halls, and a 7,000-seat music venue.

“We’re building something that’s an attraction,” he said. “It’s not just gaming — not slots in a box.” It’s also a spectacle.

While the the 638-room guitar tower can be seen for miles, even from Miami on a clear day, much of the re-imagined resort is outside the tower.

A 13.5-acre water oasis: a lake with kayaks, full-service cabanas with flat screen TVs, and a man-made beach. A new seven-story, 168-room hotel building sits adjacent to the guitar tower and has swim-up rooms on its first floor.

This long list of amenities makes Hollywood Florida’s Hard Rock an attractive proposition even for visitors not interested in gambling. “Casinos that want to succeed in the future are those who have the capital to have a wider variety of attractions,” said Michael Pollock, managing director of research company Spectrum Gaming Group.

“Very few people are going to come to Florida to gamble. But they’re going to go to Florida to be entertained.” Allen added that recent increase in gaming options on mobile across the USA has also pushed the brand to expand its hotels’ options.

“We created an integrated resort because the gaming industry will change in the next 10 to 15 years,” continued the Hard Rock chairman.

“This isn’t the Las Vegas strip. We want this to be a reason to come here.” He added that the operator has a star studded line up in store for the music venue, with Jay Z the first to be announced as part of his tour this autumn.

Indeed, Allen wants to ensure his idea for a guitar-shaped tower is backed up by a full accompaniment of entertainment options. “This is the most advanced entertainment facility in the United States,” he concluded.

“We spared no expense in creating something that is not just about live music, but it also set up for complete TV, any type of event, with Broadway, boxing, martial arts. It’s really a true entertainment destination.”