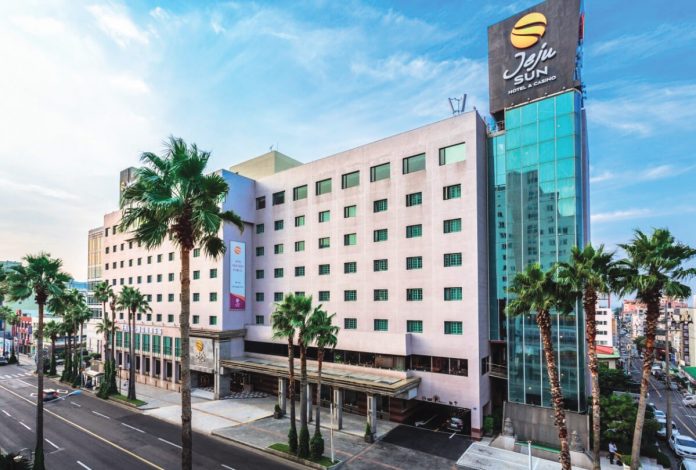 After losing out on the bid to take control of the Savan casino in Laos earlier this year, VIP gaming room promoter Iao Kun Holding Company has signed a deal to purchase its first brick-and-mortar property. James Walker reports.

The five-star property is located in Jeju City on the island of Jeju-Do, just five minutes from Jeju International Airport. The hotel has 203 rooms and suites, 2,125sq.m of gaming space featuring table games such as baccarat, blackjack, sic bo and roulette, as well as the latest slots and electronic gaming machines, several dining establishments, a lobby lounge, bar and banquet facilities.

The purchase of Jeju Sun marks IKGH’s entry into brick-and-mortar casino operations. Upon completion of the deal, the group, which operates VIP gaming rooms at five Macau properties – Starworld, Galaxy, City of Dreams, Sands Cotai Central and Le Royal Arc – will become the first Macau gaming operator to have a gaming licence in Jeju.

“We are excited to be acquiring the Jeju Sun Hotel & Casino in Korea, our first lodging venture, which effectively broadens our strategic focus toward becoming a full-service hospitality company,” said Lam Man Pou, chairman of Nasdaq-listed IKGH.

Jeju provides excellent accessibility from the Chinese mainland, with many daily flights from the major Chinese cities

“We believe the acquisition will materially expand our footprint in Asia into the growing Korean market and increasingly popular island of Jeju-Do while allowing us to further diversify and stabilise our revenue streams and cash flows.

IKGH has consistently noted that it has been seeking to diversify its operations outside of Macau. Earlier this year, the group was shortlisted for potential ownership of the Savan Vegas Hotel and Entertainment Complex in Savannakhet, western Laos, although it lost the bid to Hong Kong-listed casino services firm, Macau Legend Development.

For the first five months of 2016, IKGH’s rolling chip turnover – a benchmark figure used by casinos to measure the volume of VIP business transacted – was down 46 per cent year-overyear to $1.83bn (E1.6bn).

With the purchase of Jeju Sun in the rapidly expanding Korean market, IKGH is hoping to shore up its assets in the struggling Chinese Special Administrative Region of Macau. Although the former Portuguese enclave remains by far the world’s biggest gambling hub, gaming revenues fell 9.6 per cent year-onyear in May to $2.3bn (E2.1bn), worsening slightly from April’s decline of 9.5 per cent, according to Macau’s Statistics and Census Service.

“Jeju provides excellent accessibility from the Chinese mainland, with many daily flights from the major Chinese cities,” IKGH said. “In addition, all mainland Chinese can travel to Jeju visa-free, making it an ideal destination for Chinese travellers and casino patrons.

“Jeju also has a low gaming tax rate compared to other jurisdictions. The gaming tax is paid net of junket commissions and other expenses and will be typically below 15 per cent of net gaming revenue.”

“IKGH sees significant potential to rapidly grow VIP operations on the island, given that VIP gaming in Jeju is currently underdeveloped,” the group added. “Upon reviewing potential opportunities, IKGH determined that the acquisition of the Jeju Sun Hotel & Casino and obtaining the non-expiring gaming licence was the optimal way to diversify outside of Macau given the quality of the property and its proximity to Jeju International Airport.”

The company expects to finalise its funding arrangements for the acquisition in the coming weeks.